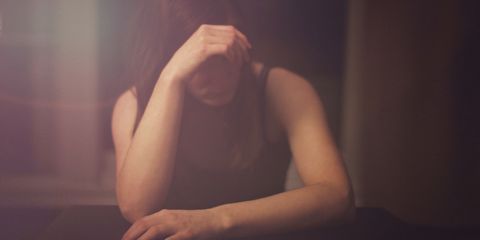 Judging by my actions, I have never had as much contempt for anything as I do my own face. A conventionally attractive face with a Roman nose and cleft chin and infinitesimal birthmark under one eye (though I honestly never remember which one).

I've attacked my face with probably a dozen objects that are either sharp or hard at one end—tweezers, an extruder, an earring post, an unspooled paperclip, a pushpin, a toothbrush handle, the rough side of a nail file, lotion caps, and nail clippers. Also, rubbing alcohol and hydrogen peroxide, poured directly onto my defenseless skin.

Here's what propels this behavior from destructive to downright self-sabotage: As a freelance writer, I make my living interviewing celebrities, often face-to-face. I'll chat with the most beautiful people in the world and then rush home to sit on my bathroom sink and pick at my face. Not because talking to famous people hurts my self-esteem—each outing, I take pride in representing the publication I'm writing for. The urge to self-injure just always pulses through my head and hands. And it's my go-to method of procrastination when I have a deadline.

The roots of my bad behavior can be traced, like so many people's terrible memories, to the school lunchroom.

I moved a lot as a child. Being the new kid becomes more difficult with each academic year. In kindergarten, I was a fascinating non-native who won over classmates by passing out chocolate bars. In fourth grade, I had a divorce-scorned teacher who spat, "Another one?" when the principal introduced me on my first day. The other fourth graders mocked my Southern accent, and one would eventually sign my yearbook, "Dear Monica, How's Bill?" because I had dark hair like a certain famous ex-intern.

By seventh grade, I was always avoiding the cafeteria during lunch. Sometimes I watched movies in my social studies teacher's classroom. Sometimes I called my mom from a payphone to shoot the shit. Lots of times, I paced in a bathroom stall waiting for the 26 minute-break to expire.

After school, I was always famished. I'd never wake up early enough to make myself breakfast, and when everyone else was buying personal pizzas and cartons of milk for lunch, I was usually studying in a bathroom stall (I would have killed for the distraction of a cellphone back then). So when I got off the bus, everyday was a pantry free-for-all—cookies, chips, jars of peanut butter, pickles—I believed I could eat whatever I wanted to make up for the calories I'd denied myself earlier in the day. I'd keep eating until dinnertime, when I'd be the first one in my family to grab a plate.

Once, I made up an excuse not to attend my roommate's birthday so I could stay home and eat her cake before she blew out the candles.

My binge-eating continued for about a decade—I credit my metabolism-burning anxiety with why I was never seriously overweight. In college, I'd eat whatever I foraged from my roommates' stashes without their permission, knowing the guilt would keep me from falling asleep before my assignments were completed. Once, I made up an excuse not to attend my roommate's birthday festivities so I could stay home and eat her cake before she even blew out the candles. The day I moved into my first post-college apartment, I spent $80 on groceries at Whole Foods, which I ate in their entirety in one sitting. I usually ate tempting foods (AKA all foods) from start-to-finish so their presence wouldn't taunt me later when I was inevitably on a "good" diet again.

When I was 21, after graduating college, I returned to my parents' house in suburban Illinois for what I assumed would be a short visit. It lasted four years. I spent every second furious with myself. You squandered a hundred thousand dollars on your education only to wind up unemployed. You're waiting for some guy to bail you out of your malaise. My family was unable to ignore my bingeing, mostly because I'd limited my vocabulary to three phrases—"Don't let me eat anything I'll regret," "I can eat whatever I want!" and "I can't believe I ate that!" Anytime someone in our home purchased a pint of ice cream, it was assumed that I would pick out all the good parts in the middle of the night.

I've always been very self-aware, and I knew I was bingeing while I was bingeing. I knew what my problem was—whenever I was bored, I went to the kitchen. So I decided to find a new place to spend my ample downtime.

My parents' bathroom is bigger than any room I'll likely ever rent in New York City. There's a shower and a jacuzzi, a walk-in closet, and a separate room with the commode. But the sun around which everything else seemed to revolve was my mother's stainless steel 10x magnifying mirror. In front of the mirror was a shabby chic bench, painted white and upholstered in fabric fit for a Beatrix Potter book. To the right of the mirror, my mom kept a miniature glass vase filled with sanitizer and Tweezerman tweezers in various sizes and pastel hues.

I remember the first time I saw my eyebrows in my mom's mirror—they looked downright manly, with grubby hairs several centimeters in the wrong direction. I plucked every last stray, feeling immediate satisfaction, like a grown woman who'd finally learned how to take care of herself. Yet when I glanced in the mirror the next day, there were new hairs that I'd seemingly missed. I started looking at my eyebrows in the mirror multiple times per day, plucking the delicate skin above my eyes until it was red and raw.

I'd descend into the mirror for up to four hours a day.

Soon instead of spending five-minute increments in front of the mirror, I'd descend "into the mirror" for up to four hours a day. It was a suspended reality where only what I could see mattered. My tweezers wandered from my eyebrows and I would nick and squeeze and yank at every clogged pore on my face. At one point, I became convinced that there was a lone dark hair trapped under my chin. I could think of nothing more vital than removing this growth from my face. In the process of freeing the (probably imagined) hair, I dug an eighth-inch deep hole. I decided that it was healthy to have my wound out in the open—at least I wasn't secretly hoarding food. My parents were horrified, but my mother would not get rid of the mirror ("It's mine. I need it to see").

I saw a battalion of dermatologists and inquired about a plastic surgeon, but all agreed that my problem was psychosomatic—dermatillomania. At one point, I threw my mom's pair of mint tweezers into a lagoon.

Finally I checked myself into a three-week outpatient program for depression and anxiety, eager to stop hurting myself. One of the tenants of the program was "no war stories"—you couldn't share specific details or personal anecdotes from your life that could prove triggering to another person. So I never got to talk about how I hurt myself, and how much I liked it.

Most people ease back into their day-to-day routine following a psychiatric hospitalization. Instead, I relocated across the country days later—back to New York—content that I'd proved to everyone that I was ready to tackle any obstacle.

I asked a Manhattan editor for work, and she suggested party reporting. Party reporting, otherwise known as red carpet reporting, is standing with a scrum of reporters in a roped off area, clamoring to talk to the same celebrities and outdo each other with sound byte exclusives. The thought of party reporting was exciting, but on the day of a gig I was usually dejected and nearly nauseous, sure I'd mess up and let my editor down.

I never got to talk about how I hurt myself, and how much I liked it.

My skin initially improved when I returned to NYC because I left the magnifying mirror with my mom. And now I was also very busy, though in a high-anxiety cycle of interviewing and transcribing. But slowly, the bathroom mirror began to beckon. Because it wasn't magnifying, I would perch on top of the toilet tank to get as close as possible. I would tweeze and squeeze, filling my garbage can with tissues dotted with bloody Morse code. I began avoiding my roommate and retreating to my room lest I be confronted about my bathroom habits. Occasionally, I would pick at my skin and then immediately binge on junk food, which made me so angry that I'd go right back to the mirror.

Me at the
Courtesy of Jenna Marotta

On a terrible day in November, I was supposed to interview Steve Carell at a screening of his new film, Foxcatcher. I have a background in comedy and lots of Second City friends, and I was ecstatic to meet the 40-Year-Old Virgin. Yet I was terrified that I'd choke, letting down my comedy friends and my editor, embarrassing myself before a man I admired. As day seeped into night, I could not stop pressing down on a cyst on my chin. Blood splattered on the sink drain as I mutilated myself, panicking in the process that the wound wouldn't cauterize in time for me to apply make-up for the interview. About 45 minutes before I had to be in uptown Manhattan, I scrubbed the blood off the sink, put on a floral Kate Spade dress, and called an Uber. When I interviewed Carell, I probably seemed poised but I felt like a fraud—could he see through me? Could he see through my makeup to the throbbing physical and emotional pain?

In 2015, I stopped hurting my face, mostly by accident. I went on my first work trip—reporting from the Sundance Film Festival—and I forgot/neglected to pack tweezers. For 10 days, I worked harder than I ever had in my life, and I barely had time to look in a mirror.

Two weeks after Sundance, I turned 27. My whole life, my mom has whispered to me about the mythical age of 28, when "suddenly you realize exactly what you want in the world," (her version of Saturn's Return). The one thing I know already is that I want to be nice to myself. No one is going to love the person who is literally tearing themselves apart. And no one tearing themselves apart is fit to contemplate marriage and motherhood.

Recently I interviewed actress/poet Amber Tamblyn for Marie Claire. While doing research, I found this quote of hers in the latest issue of Bust: "Instead of acting out in physical violence, young women go inward and harm themselves."

But when I turn 28, I'm going to try my best to let go. And when I can't, I won't be taking it out on my face—my skin has never done anything but hold me together.

When Plucking Your Brows Becomes a Life-Changing Disorder

Ready for a Skintervention?

How Your Body Changes When You Switch Birth Control

This content is created and maintained by a third party, and imported onto this page to help users provide their email addresses. You may be able to find more information about this and similar content at piano.io
Advertisement - Continue Reading Below
More From Beauty
Editors Share the Face Moisturizers They Swear By
Winter Nail Shades to Beat Your Cold-Weather Blues
Advertisement - Continue Reading Below
Sunscreens Developed for Oily, Acne-Prone Skin
A Dermatologist-Approved Guide to Treating Melasma
Shampoos That'll Make Your Hair Grow Super Fast
This Beauty Brand Is Restoring Priceless Art
This Tiny Tool Gives You a Cryo Facial at Home
Stylists' Secrets to Fast-Growing Hair, Revealed
At-Home Laser Hair Removal Devices That Work
This Magic Hair Straightener Brush Is On Sale