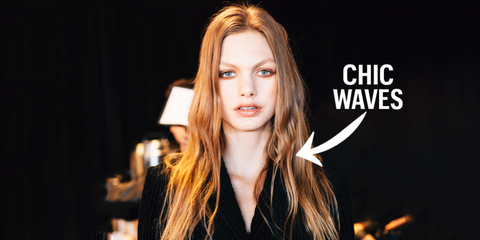 From face yoga to tastefully-applied glitter, I picked up many a cool trick backstage at Fashion Week. But as far as day-to-day practicality goes, what really struck me was how easy it is to use a double-barrel curling iron—and why have I never tried one before? True life: I'm now obsessed with the cool-girl waves it yields.

The thing is, I'd always written it off as a "pro" tool because in my mind, two prongs = twice as much trouble. It had taken me long enough to master a normal curling iron, so why complicate things? But then I saw hairstylist Kevin Ryan wielding one backstage at Tibi Fall 2016 and I was FASCINATED as I watched him give each model the most natural-looking, rock 'n' roll-worthy bends I'd ever seen in a matter of minutes. All he did was wrap pieces of the hair—from the midshafts to the ends—around one or both of the barrels in a figure-eight motion at random, for 10 to 15 seconds.

Here's what it looks like in action (though for a slightly tighter ringlet look—to steal the more relaxed Tibi style you see above, opt for Kevin Ryan's randomness):

Ryan used R Session tools for the look, and the brand's double barrel Nalu Waver (it's discontinued and perpetually hunted down on eBay) is apparently the secret behind Mary-Kate and Ashley Olsen's endlessly sought-after, seemingly air-dried messy waves. So obviously I'm sold.

"It's hard for beginners to achieve a relaxed wave look with a standard curling iron as it can tread into sausage curl territory," explains editorial hairstylist Kat Zemtsova of why more women—and stylists—are doubling down. "Double-barrel curling irons are kind of the new way to 'wave' your hair as opposed to traditionally curling it." Her pro tip for the beginners? Use gloves!

I'm dying to get my paws on one of the last living Nalu Wavers, but I'll be using Remington's Wrap to Waves Styler in the meantime. It's only $25 and has practically all the same fixings.

Lauren Valenti Associate Web Editor I’m the associate web editor at Marie Claire.
This content is created and maintained by a third party, and imported onto this page to help users provide their email addresses. You may be able to find more information about this and similar content at piano.io
Advertisement - Continue Reading Below
More From Beauty
For Sharon Chuter Self-Care Includes Champagne
The Absolute Best Red Lipsticks on Earth
Advertisement - Continue Reading Below
Our Favorite Self-Tanners for Dark Skin Tones
Top-Rated Dip Powder Nail Kits to Experiment With
Go Platinum Blonde Without Destroying Your Hair
Tried-and-Tested Skincare Products That Work
Shizu Okusa﻿ Swears by Forest Bathing
Eye Creams That Work Wonders on Puffiness
Editor-Approved: The Best No-Streak Self-Tanners
This Could Be Your Adult Acne Super Treatment
Created for From Marie Claire for Created by Marie Claire for
Altreno