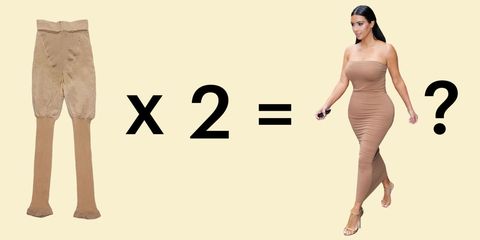 "Sometimes I wear two pairs of body shapers on top of each other—especially when I am heavier, I def double it up," Kim Kardashian confessed in a recent post on her app. As a KUWTK diehard, I've always admired Kim's transparency about everything from Botox to cellulite treatments. Intel that she is, in fact, human is always precious.

But while I was aware she's a shapewear enthusiast (remember the I-Cannot-Leave-the-House-Without-My-Spanx episode?), I had no idea she had it down to such a science.

"I wear two pairs that are the same length," she continued. "I try not to layer two different lengths, because I don't want there to be visible seams. I want there to always just be one seam."

The pièce de résistance of her Spanx collection? The Higher Power Capri ($28).

"I just recently got introduced to the footless tights, which I can wear with longer dresses like this—so you'll NEVER see my Spanx line because the seam is lower," she says. "I typically like them past the knee or right at the knee. They really hold you in and make you feel secure!"

Before getting Kim's play-by-play, I had never considered wearing shapewear. I'd love to say this is because I'm 100% happy with my natural physique, but if I'm being honest, part of me was a little afraid I'd get addicted to it. As a curvier woman like Kim, I have many of the same insecurities and didn't want it to become too much of a crutch. I'd always thought of it like Facetune, except IRL.

But endlessly curious—and in the interest of investigative journalism—I decided to ignore my hang ups and have a go at it. So here's what you get (and how you feel) when you double up shapewear underneath different bodycon silhouettes à la Kim.

I started off with one of Kim's most famous looks, the seamless Wolford Fatal tube dress. It encompasses so many elements of her signature style and let's be real, leaves virtually nothing to the imagination.

When I pulled on the first layer of Spanx, it felt like an extra compact version of tights. I was a smoother, more taut version of myself. I was into it. But getting on the extra layer was a whole other story. Not only was it twice as hard to get on, but once I strapped myself into the second layer, it felt like a girdle. In fact, it was like walking around with a different body. This said, it really improved my posture. I felt taller and more statuesque.

In the Fatal dress, I was amazed at how cinched my waist looked. It was like wearing an invisible corset. And from the side, it enhanced the S-curve and took my butt to new heights. My only complaint was that the double layer of Spanx made it hard to maneuver my body—especially my stomach area.

I didn't eat in the Spanx, but I imagine polishing off a larger meal would have been damn near impossible. Elegance is refusal, I suppose.

This ribbed knit dress was the least constrictive of the styles, but I found the material to be the least forgiving in the bum area. Thus, I was thankful for the bump-free smoothing and lift from the Spanx. In pictures especially, I thought it made the style look more bespoke and expensive. Tailoring hack!

This stretchy black knit fabric felt inherently flattering, but the Spanx really took it to the next level in the derrière department. Just as it did in the previous two looks, it airbrushed the edges and made things more pert overall.

I'm a Spanx convert, but I won't be doubling down again anytime soon. I think one pair of the Higher Power Capri is the perfect compromise between taming things (i.e. smoothing and compressing) in less-forgiving looks while also letting yourself live. And if anyone has anything to say about it, well, I'm ready to own up to it/wax poetic about the shapers—just like Kim.

Lauren Valenti Associate Web Editor I’m the associate web editor at Marie Claire.
This content is created and maintained by a third party, and imported onto this page to help users provide their email addresses. You may be able to find more information about this and similar content at piano.io
Advertisement - Continue Reading Below
More From Beauty
Tatcha Products Are 20% Off
You Can Get a LED Light Therapy Mask for $100
Advertisement - Continue Reading Below
The L’Oreal Steampod Flat Iron Is On Sale
The Most Unmissable Beauty Deals on Prime Day
Fall Hair Shades You're Going to See Everywhere
Native Deodorant Is 25 Percent Off for Prime Day
This Is the Only Self-Tanner That Works
Try These Editor-Approved Shampoos & Conditioners
The Ultimate Cult Zit Treatment Is 30% Off Today
Alert: The Silk’n Infinity Is on Sale