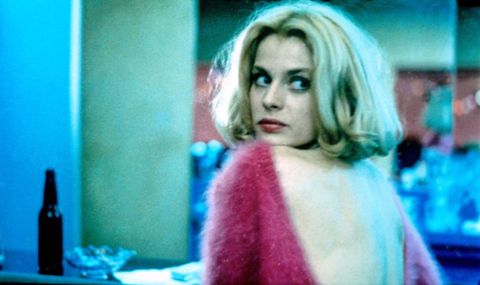 For as long I can remember, I have had good-bad hair. From birth—when I emerged from the womb with a full head of Don King-like tufts—to approximately 10 years old, I had great, heavy sable swaths, so straight they couldn't hold a curl. Then puberty descended, and from then on, I had to contend with masses and masses of horsey, cowlick-y pouf that only recently settled into something resembling a mid-length style. Kind of like a topiary. Because it is now also green.

Others would tell you that these are the delusions of a malcontent, because, no, you actually have great hair, but it doesn't bother me—minus that time I wept in a stylist's chair in Taichung because she cut the layers so short it actually bloomed into a mushroom cloud, I've always been rather "whatever" about the state of my head, ext. Then the dye and the shears happened a few weeks ago, and I began really, *really* feeling myself, even though, objectively, there is still plenty of room for improvement. (Isn't there always?)

Here's the thing: Even though the beauty-industrial complex has crossed over into Loving Your Natural Texture! and Straight Isn't the Only Way!, there are still certain sorts of hair that have yet to be held up as desirable. See how The Curly-Haired One has spirals as perfectly formed and separate as double helixes? See how there's nobody—nobody who's not an "after" in an ad for smoothing cream, that is—with clumpy, stiff, bunches that are more sea sponge than human fiber? The seesaw might have tipped in favor of acceptance, but it hasn't helped up the smaller kid who's slipped off—the one with the ends cut far too blunt to do anything for the volume.

And yet...do we really need commercials when we've got Instagram and, oh, our own ever-malleable minds? Look at Nastassja Kinski in Paris, Texas with her pink angora jumper and a faintly polygonal lob. Regan Laird walking Gucci with a cumulonimbus of white-blonde cotton wool. Fried, bleached-out surfer waves at Alexander Wang. Poor Barb from Stranger Things! Wasn't The Daria kind of pointy too? (It was.) Even Transparent's Gaby Hoffmann, with her thick, gray-streaked bob so solid it kind of *sits* there on its own.

That's the rub: Hair is what you make it, not only in the sense of a life-making run-in with some neon pigment. Take a *real* look over one someone's prescribed for you, even if it goes against everything else out there. Choose risk over safety, wrong over "correct," which is usually code for "the wimpy path of least resistance." Any kind of hair can be good if you've got the conviction. After all, the triangle is the strongest shape.

Chelsea Peng I'm Chelsea Peng, the assistant editor at MarieClaire.com.
This content is created and maintained by a third party, and imported onto this page to help users provide their email addresses. You may be able to find more information about this and similar content at piano.io
Advertisement - Continue Reading Below
More From Beauty
The Nail Trends for Spring Are All About Optimism
These Shampoos Will Make Your Hair Grow Super Fast
Advertisement - Continue Reading Below
24 Hours With Hailey Bieber
Acne Spot Treatments That Actually Work
Why The Lashify Control Kit Is Worth It
What to Buy From Sephora's Spring Savings Event
Hot Tools Are No Match for Heat Protectant Sprays
How to Tighten and Firm Your Neck Area
The Blue Shampoos Brunettes Will Love
Snuggling Gives Kristen Bell a Great Sense of Calm