Getty Images
Through the ages, women have always gone to great lengths to get beautiful hair. From ancient styling tools that could've doubled as machetes to 21st century electronic perm machines, it's been one fascinating "must-have" gadget after another. (No judgement here, ladies—we would've been right there with you.) Thankfully, we've come a long, long way. Here, a look back on tools that would raise more than a few eyebrows today.
Getty Images
1 of 10
Bone Comb, 5th-8th Century

The people of the ancient Merovingian civilization (which today would be located in parts of France and Germany) tamed their tresses with combs made out of actual bone that we pray came from animals. Also pictured are scissors and engraved hair pins—what a classy dynasty.

Always conscious of vanity, styling tools were a symbol of rank amongst ancient Egyptians. They used fancy, weapon-like bronze tools like these for curling and trimming their hair.

In 1783, Horace Benedict de Saussure, a Swiss physicist and geologist, made the first hair hygrometer. What's a hair hygrometer? Well, it measures the humidity of human hair. (But of course.) Mark this down as something we really want to try.

After being filled with boiling water, these glazed stoneware Thermicon hairdryers promise to "dry the hair after washing" in a matter of minutes. We'll believe it when we see it.

Tongs have been used since ancient times, but it was only in the late 19th century—when women began to wear their hair curly at the top—that they really rose to popularity. This Crompton electric curling heater was used to get the job done.

Invented by Charles Klein, this electro-prophylatic hairbrush is made of slightly-magnetized iron rods. It promised curative powers such as magneto-therapeutics—said to relieve headaches and prevent baldness.

In 1935, this head-shaped drying device took a hair fashion show by storm in London. Kinda like the ultimate suit of armor for a bad hair day.

Believe it or not, back in the '30s this dual lamp situation was considered a "modern" hair dryer. We're guessing it was more suitable safe for setting a hairstyle as opposed to an at-home blowout.

This is what you might call an old-fashioned approach to a perm. Here, a woman at Em Westmore's beauty salon has her strands coiled in an electric permanent wave machine, which was used on long hair. Westmore's MO was turning every gal from a "chairlady" into a "glamour girl."

Next
8 First Ladies Who Should Have Been President 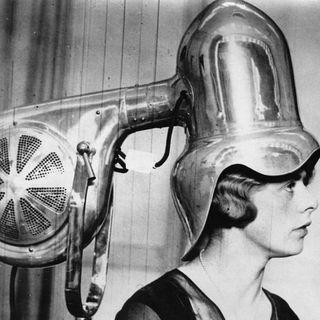