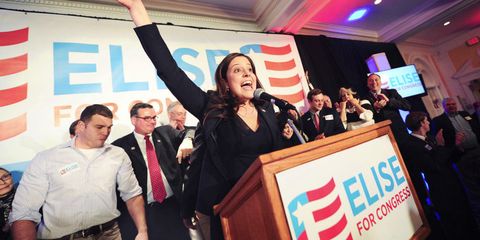 New York native Elise Stefanik is a 30-year-old truck-driving, Instagram-loving D.C. badass. She's also the youngest women ever elected to congress. We asked for her top tips for slaying the naysayers and becoming a political supernova.

1. Your age is a commodity—so own it.

"I was a young candidate who does not look like a typical candidate. I realized that people would talk about that early on, so I really wrapped my arms around the youthful aspect of my candidacy. My slogan wasn't Stefanik for Congress; it was Elise for Congress. I wanted it to be accessible, young, and energetic. Some voters didn't even know my last name."

2. Forget your critics (there will be so many).

"You have to have thick skin. Some of the comments [people make] are harmful, in terms of what you're wearing and how you look, but it's part of the job...I was criticized for wearing patterned tights by some of the older men in my district, though it's pretty typical for a woman in her late 20s, 30s, or any age to wear tights like that. Now some of the older women in Congress are saying they're going to look for patterned tights, too!"

"Too often candidates and elected officials spend so much time talking and sharing their views and not enough time listening. This is the strength of our campaign, and I think it's something women are really good at. When I told Congressman Paul Ryan I was thinking of running, he gave me great advice: 'You have one mouth and two ears, so use them in that ratio.'"

This article appears in the May 2015 issue of Marie Claire, on newsstands now.

The 20-Something's Official Guide to Getting a Raise

Congress Has Waged a War Against Women

Lane Florsheim Features Editorial Assistant I'm the features editorial assistant at Marie Claire.
This content is created and maintained by a third party, and imported onto this page to help users provide their email addresses. You may be able to find more information about this and similar content at piano.io
Advertisement - Continue Reading Below
More From Money & Career
140,000 Jobs Were Lost In December—All Women's
Allison Statter Is More than Kim Kardashian’s BFF
Advertisement - Continue Reading Below
Questions to Ask During a Job Interview
The Woman Behind Thousands of Small Business Loans
Created for From Marie Claire for Created by Marie Claire for
Bank of America
You Can't Pick Produce on Zoom
How to Afford the Freelance Life
Freelance With Benefits? You Bet.
How to (Mentally) Make the Be-Your-Own-Boss Move
The Gray-Area Economy
Black Women Are Making Their Own Space In VC