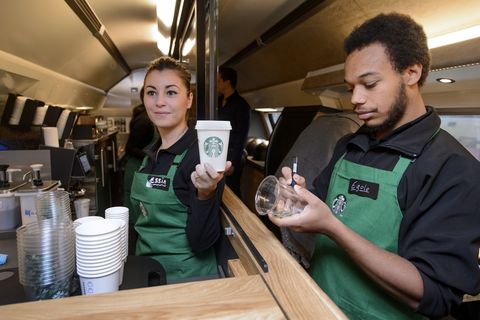 In case you haven't noticed, it's hard out there for anyone on the job hunt—perhaps most notoriously for young recent grads trying to sniff out something stable. Though the economy's not quiiiite as horrific as it once was, it's a challenge to get started, especially if you're not one of the lucky ones with a degree or connections.

But as of today, a group of big companies is stepping in to help. The New York Times reports that Starbucks, Macy's, Microsoft, Target, and others are joining the 100,000 Opportunities Initiative, which promises to create at least that many jobs for Americans aged 16 through 24.

In a press release, the companies say the initiative is designed to help people who face barriers to moving up the corporate ladder. There are 5.6 million young people who are out of school and out of a job, but there are 3.5 million open job listings out there. If young people were better educated about how to get these jobs, it would be a win-win for everyone. Career fairs around the country, starting in Chicago, will focus on young people who have limited resources—and the most to gain.

Starbucks is going to hire 10,000 of what the project calls "opportunity youth," and many of those new employees will be eligible to get fully reimbursed college tuition and training programs within the company. Taco Bell has a similar education program, which also includes GED programs, associate's degrees, and bachelor's degrees. Hilton hotels will hire at least 15,000 young people for its businesses.

If you're interested in joining the program, email the initiative at connect@100kopportunities.org.