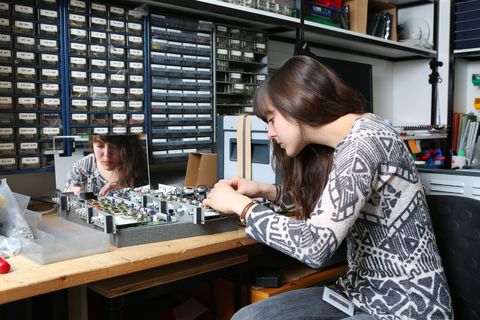 Want to make more money than men? Major in engineering. A new study found that female engineers outearn men—at least at the beginning of their careers.

Researchers at the Federal Reserve Bank of New York found that the gender pay gap hardly exists at all when it comes to recent college grads. Young women are making 97 cents on the dollar compared to young men with the same college majors and the same jobs. And 29 of the 73 most common college majors, young women are actually making more money than their male counterparts.

Alas, there's a catch: By mid-career, that gender gap reverses itself in many of those fields. For example, in social services, women start out making 16% more than men, but by mid career, men make 10% more than women. Bloomberg posits that this might be because recruiters are looking for a diverse group of recent college grads to hire—but then when HR gets less involved in hiring mid-career candidates, it's easier for managers to be biased.

Of course, it would be ideal if both genders made equal money for the same job. But for now, why not join a field where women get paid what they're worth? Here are 15 college majors where women go on to outearn men, ranked by how big that difference is: