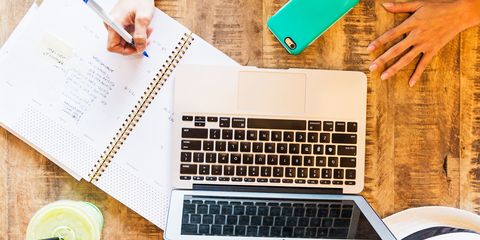 Last month, Intel announced a $5 million investment in Georgia Tech to increase the number of women and minorities studying computer science and engineering over the next five years. It's only the latest example of a big-name university's push to shrink the well-known gender and racial diversity gaps in STEM (science, tech, engineering, and math) studies. Similar efforts at four-year schools go back more than a decade and a half, heralded by the landmark 1999 MIT report "A Study on the Status of Women Faculty in Science at MIT" that led to sweeping changes at that school in order to boost faculty diversity.

Overlooked in all the talk about closing the STEM gender gap? Community colleges, where women are apparently killing it. According to a 2012 Institute for Women's Policy Research report, over half of women who get advanced degrees in STEM-related fields started out at community college (54.7 percent of women, versus 44.4 percent of men).

Overlooked in all the talk about closing the STEM gender gap? Community colleges, where women are apparently *killing* it.

What's more, a recent study by two Iowa State University researchers found that women at community colleges reported a friendlier atmosphere in STEM-related classes than at four-year colleges. "It is just such a global community," one student said of her community college experience. The researchers found that similarity in backgrounds and lifestyles made women feel more comfortable stepping into leadership roles in activities and assignments. Strong advising and support from faculty also marked a major difference. Since so many students transfer out, they often work closely with guidance counselors to develop transfer plans. "The two-year plan keeps me focused, and saved me with financial aid," another woman said.

"Community college is a great avenue for those who are considering STEM but aren't completely comfortable yet with the idea of going into a field that's heavily mathematical," says Catherine Hill, the vice president for research at the American Association of University Women (AAUW). "If you decide that you're interested in the sciences a little bit later in your career, you can inexpensively catch up on the coursework you're going to need."

So when we talk about the STEM gender gap in academia, why aren't we focusing our attentions on community colleges—and what they're doing right? "There has been a stigma about community colleges, in part because they do let in a wider variety of students," says Hill. "You'll tend to spot people who are very prepared at community colleges and also those who are struggling to get through remedial courses and catch up. But you see more women than men using community colleges as a platform to get to a four-year college."

One of the most vocal advocates of community college is Dr. Jill Biden—wife of Vice President Joe Biden—who's been an English professor at Northern Virginia Community College since 2009. Earlier this month, Biden, alongside President Obama, traveled to Macomb Community College in Warren, Michigan to deliver remarks on the importance of America's community colleges and promote the administration's American College Promise, a $60 billion plan to make two years of community college free for students who met requirements like a minimum 2.5 GPA that's currently stalled in Congress.

"Women who are interested in pursuing bachelors and master's degrees—especially in STEM fields—benefit from starting at a community college," Dr. Biden told us. "Women who earn a certificate or degree from a community college will be ready to move into a good-paying job in the growing global economy."

In fact, community colleges boast rockstar female alums, in some cases going back decades. "The courses I took at Corning Community College were exactly what I wanted," says Eileen Collins, NASA's first female shuttle commander, whom Corning's observatory is named for. "I never felt self-conscious being a woman in the classroom. I never felt that way at all."

Another big problem: College and university marketing materials tend to spotlight men in engineering settings (you know, the guys in the white lab coats and in the computer lab). "I can't tell you how often I go to a school's website before I train them, and they have all males on the program page," says Donna Milgram, the Executive Director of the National Institute for Women in Trades, Technology, and Science (IWITTS).

At the City College of San Francisco, enrollment in the networking and information technology program went from 19 percent women in 2006 to 33 percent two years later after brochures and posters were updated to feature women.

But that's a problem easy enough to fix, Milgram says.  She heads up the CalWomenTech Scale Up project, a collaboration among several California community colleges to recruit and retain women into STEM fields, where role models are a key focus. "Even if they have just one or two graduates of the program as available resources, it's a key part of outreach," she says. At the City College of San Francisco, enrollment in the networking and information technology program went from 19 percent women in 2006 to 33 percent two years later after brochures and posters were updated to feature women and college counselors stepped up active recruitment efforts.

Community colleges have also seen success by enrolling more women in so-called "bridge classes"—entry-level courses in subjects like auto-repair, which traditionally draw men and are a good launchpad into more sophisticated engineering courses. The CalWomenTech project developed an "Auto Repair for the Layperson" class at Evergreen Valley College and promoted it heavily to women. The result? Nine female students who took the course enrolled in the school's introductory automative technology course the next semester, the largest number of women ever to do so.

Of course, no matter where they get their degrees, women in STEM careers face daunting challenges. But there's no question that improving their numbers at the undergraduate level can go a long way in getting more women into these workplaces. Says Hill, "Community colleges might be the back door right now, but they'll be the front door soon."