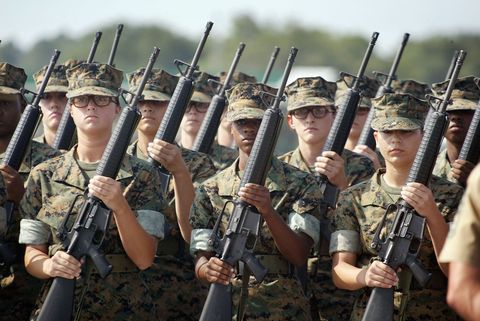 The Pentagon has made a historic decisions to pay for members of the military to freeze their eggs and sperm, according to the New York Times.

The goal is to encourage women to stay in the service during their 20s and 30s by giving them the option to start a family later. According to the report, after 10 years of service, women have a retention rate 30 percent lower than their male counterparts. For men, they're hoping the program will provide the peace of mind that if they're hurt on the battlefield, they may still be able to have kids when they return home.

"Particularly for women who are mid-grade officers and enlisted personnel, this benefit will demonstrate that we understand the demands upon them and want to help them balance commitments to force and commitments to family," Defense Secretary Ashton B. Carter said in a speech last week. "We want to retain them in our military."

The pilot program, which only active military members are eligible for, will be evaluated in two years and could then become permanent. Egg freezing can cost up to $10,000 and the estimated cost of the program is about $150 million over five years, according to the report.

This program is the latest incentive being put in place by the Pentagon to compete with family-friendly policies at other big companies. They'll also offer 12-week maternity leave and lactation rooms, they announced last week.

While it's great news that the military is offering competitive benefits, egg and sperm freezing benefits come with a whole slew of ethical questions. When Facebook and Apple announced their egg-freezing programs in 2014, they faced criticism that the initiatives send the wrong message to women: that motherhood is a liability.

Of course, being a woman in the military is a whole different ball game from being a woman in a corporate office environment. Only time will tell how egg-freezing fares for those in the forces.