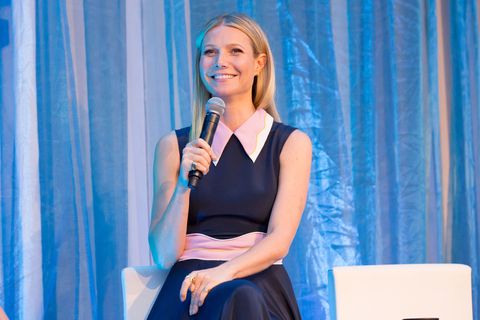 What do you get when you put Gwyneth Paltrow in a room with 100 women business leaders + Marie Claire's EIC Anne Fulenwider? A candid and hilarious conversation with GOOP's very own badass girl boss that you pretty much have to see to believe.

But in the event that you can't watch the below video due to secretly peeping this article at work (totally get it), we've got you covered with highlights from Marie Claire's Power Trip conference with one of the most fearless females in the game. Keep scrolling for 12 things you didn't know about Gwyneth Paltrow, a businesswoman who also happens to be a baller.

When it comes to GOOP criticism, Gwyneth has a 👌👌👌  sense of humor:  "There were times when people were very cruel about me and what I was trying to do. At a certain point, you think 'Gosh, this just can't be about me.' This has to be a projection, or this has to be something else. There has to be some other energetic body behind this, becuase I'm just selling some f--king sweaters."

She stands behind Conscious Uncoupling, and why not? It totally worked: "It's such a bizarre phrase, but having said that, the idea behind it is so powerful and so positive, ultimately. At the time, my marriage was over, and I was devastated.  I was coping with all of that, and then to have this global media onslaught about it. It was really a hard time...[but] if you can stay a family without being in a couple, then the damage is really mitigated."

She knew vaginal steaming would break the internet: "I was like 'oh, I think this is gonna cause a stir.' For weeks, there was nothing. My editorial board was like, "that's so weird..." And then somebody picked it up, and it went totally insane."

Her family routine is completely normal—but like, actually: "Normally I drop [the kids off], I exercise, I go to work. If their dad is in L.A., he'll pick them up at the bus. Then I'll come home from the office a little bit later and we have family dinner."

She does her own cooking...most nights: "Not seven nights a week, but many nights a week. I just really like to cook. My brain turns off, I find it really relaxing."

She's not actually that high maintenance about food: "I eat bread. I eat dairy. I just try to not eat really processed cheese. Like, I eat cheese from a good cheese store. I have organic milk or yogurt. I have it all the time."

Her last credit card statement has a casual Goop.com order on it: "I actually got an order from Goop.com this morning of body scrubs. What, you think I transmit it? Our warehouse is in Atlanta, and it's moving to New York, so I order online. But I love that experience, it's really fun!"

Her secret talent is playing guitar solos...like, with her mouth: "I can really sing guitar solos note for note, perfectly. Especially like from '80s rock bands."

Her go-to karaoke song is (somewhat reluctantly) from Glee: "They make me sing that freaking Cee Lo song that I sang on Glee." (Note: the song is "Forget You" and her rendition is top notch.)

She scared of flying (and by the way, so is Anne Fulenwider): "I don't like taking off so much. If my kids are on the plane, I'm less scared, but I don't like flying without them. Landing, I feel like 'we're here, I mean, if you're gonna kill me now, really? Come on.'"

Every single product on GOOP is approved by her—no exceptions: "Yes, every single thing. I go to the office every day."

She has the *best* things to say about women is business: "We're living in a very interesting time when we are finally able to give ourselves and our friends the permission to be intelligent, and powerful, and maternal, and sexual, and all of these things that aren't supposed to go together.... Right now it's a very interesting time to be a woman."

Mehera Bonner Contributor Mehera Bonner is a news writer who focuses on celebrities and royals—follow her on Instagram.
Advertisement - Continue Reading Below
More From Money & Career
I Started a Company to Pay My Medical Bills
Shan-Lyn Ma Is Here to Save Your Wedding
Advertisement - Continue Reading Below
These Mantras From Powerful Women Are So Inspiring
Created for From Marie Claire for Created by Marie Claire for
Stitch Fix
The Couple Who Paid Off $114K of Debt in Two Years
Couples + Money
ADAY’s Co-Founders on Managing a Major Expansion
Created for From Marie Claire for Created by Marie Claire for
Range Rover Evoque
From $17,000 in Debt to Home Ownership in 3 Years
I Paid Just $0.73 at Close on My First Home
3 Power Women in the World of Home Buying
How Do I Fight Burnout and Reset for Work in 2020?
The Female Founders in Meghan Markle's Closet