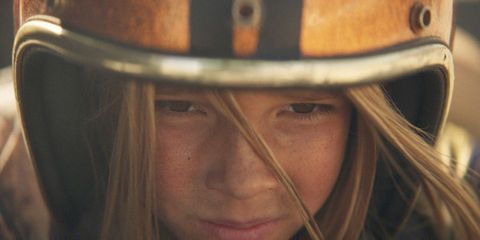 Audi's Super Bowl ad, called "Daughter," ditches the flashy standards of most car commercials and instead sends a big message about gender equality and equal pay. As a little girl competes in a downhill cart race, her father narrates the ad and tells a powerful story about gender inequality in America:

The ad ends with the slogan, "Progress is for everyone." In addition to the ad, Audi has promised to support women's pay equality in the workplace, funded a scholarship for a female film director, and has started a graduate internship program which must be 50 percent women.

Though the ad is designed to be inspirational and send a strong message about equality, it has not been received well at all. On YouTube, the spot had ten times as many "thumbs-down" reactions as "thumbs-up" ones. And just a quick scan of YouTube comments show people reacting to it as "feminist propaganda" and urging others to boycott the brand. "Tell your daughter to find a real man to marry, and to avoid the mistake that her mother made," one commenter wrote. "Tell her to buy a Dodge."

The Wall Street Journal reports that social-media data show that about 25 percent of the comments were negative and 13 percent have been positive. People who liked it found it positive and uplifting, but people who didn't like the ad indeed thought it was too political, plus they found it "disingenuous coming from a brand that has never taken a stance on the topic in the past," the firm Networked Insights said.

According to Business Insider, some people called out Audi for not exactly practicing what it preaches. Its executive team has 12 men and only two women, and there are zero women on its management team. But the company said it was pledging to hire more women at all levels.

This content is created and maintained by a third party, and imported onto this page to help users provide their email addresses. You may be able to find more information about this and similar content at piano.io
Advertisement - Continue Reading Below
More From Money & Career
How to Afford the Freelance Life
Freelance With Benefits? You Bet.
Advertisement - Continue Reading Below
How to (Mentally) Make the Be-Your-Own-Boss Move
The Gray-Area Economy
Black Women Are Making Their Own Space In VC
3 WFH Tips For Small Business Owners
Created for From Marie Claire for Created by Marie Claire for
Bank of America
The Best Finance Podcasts Out There
The Big Business of Activism
How the WNBA Pulled Off a Slam-Dunk Season
What Happened at Marie Claire's Power On Event