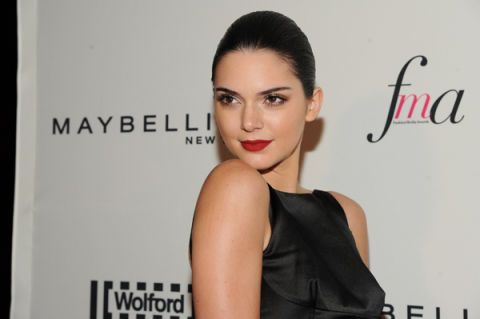 Among the top 100 things Kendall Jenner would have you know, items 1 through 3 would probably be: "I'm a Real Model;" "I became a Real Model independent of my family;" and "In fact, it's such a burden being a Real Model while bearing a famous last name."

But even if her constant protestations haven't already convinced you of her certified catwalker status, KJ went and completed a Real Model rite of passage: an artsy clothes-less photo shoot.

Kourtney Kardashian posted the au natural picture, which depicts her sister, 18, seated in a way that both covers any dangerous bits and suggests Kris used the word "tasteful" when instructing photographer Russell James. (Because you know she took the lead on this.)

While we wait for the inevitable other images, compare to Karlie Kloss's Vogue Italia spread, the gold standard for teenagers contorting their superhumanly toned bods.