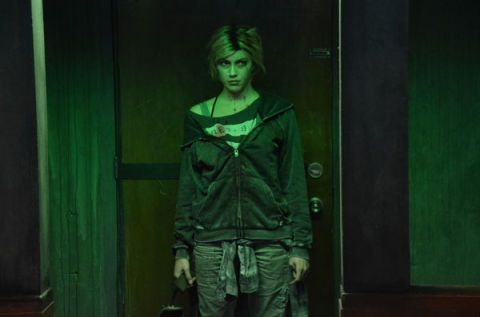 Sex, drugs, bunny ears, and snakes — and those are just the first 10 minutes of the just-released film version of graphic novel and cult favorite The Scribbler.

Katie Cassidy, known for her roles as the gorgeous, sometimes-scheming Gossip Girl girl, plays Suki, the dissociative identity disorder patient who's placed in Juniper Towers, a mental halfway house nicknamed "Jumper Towers" because people keep killing themselves—or so we're led to believe. Cassidy takes us inside the head of Suki and her many personalities with a mesmerizing 'can't look away from the car wreck if you paid me' brilliance that shows off the actress's many dimensions.

Marie Claire: So we heard that as soon as you read the script you immediately wanted the part. Why? What drew you to the role?

Katie Cassidy: I could hear her voice. And it was the challenge I had been looking for. I was like, 'I can do this. I want this.' And I was not who they [the producers] wanted. They were like, 'No. She's not right.' I knew they had glamour visions of me on a red carpet but I wanted them to see me in person. So I went in and I was like, 'I know you're nervous I don't look the part, but it's my job as an actor to become her. And I'm ready and willing to go there.'

MC: That's so rocker. And clearly you got the part!

KC: I built a backstory for the character with seven different personalities. I probably overly prepared. But after the table read, I think they were pretty confident. 'She's got this.' And then they kind of let me do whatever I wanted. So I went to the wig store and picked one out and cut it myself. Really got to own it.

MC: That's awesome. So let's talk about the fight scene between you and Michelle Trachtenberg. Did it take a lot of practice, or were you two just naturally able to kick the shit out of each other?

KC: My job requires me to be quite physical, so there was a little bit of training and rehearsing. But I think it's pretty badass.

MC: Especially in the rain with that crazy skeleton costume you donned the last half of the movie. Are you normally a big costume person? What's the most outrageous one you've ever worn to a party?

KC: I dress for comfort. I don't do the whole dress-trashy-just-because-it's-Halloween thing. I'm the fireman.

MC: Love that. So what's up for you next?

KC: Arrow premieres Oct. 8—excited about that! I'm working on the show now. And I have a fashion blog I've been working on for two years with a girlfriend of mine. I can't tell you anything about it, though …

MC: C'mon! All right, I guess we'll just have to wait and see. What about your fitness routine? You're in insane shape.

KC: I have a boxing trainer. I do that 2 to 3 hours a day. It's exhausting, but it's my job. And I feel like I'm young and [at] this point in my life is the time to work hard.

MC: Damn. So when you're not working or working out, where would we find you?


Movies for Women Who Like to Kick Ass in the Office


Zoe Saldana Will Hand You Your Ass on a Silver Platter