Meghan Markle is officially about to become royalty. Which, casual. The former Suits actress is officially engaged to Prince Harry, and the couple appeared in an official photo call with the palace during which they looked all kinds of in love. But let's be honest here: We're all dying to know about Meghan's stunning diamond engagement ring.

DYING over how pretty this is. Here's a closer look:

The ring reportedly features diamonds from his mother Princess Diana's collection, which Harry will likely confirm or deny during an on-camera interview airing later today. According to Daily Mail, Prince Harry even designed the ring himself. The center stone is believed to be a diamond from Botswana.

Read more about their upcoming marriage below, and please go ahead and cancel all your plans for spring 2018 as Royal Wedding Watch is basically a full time job. 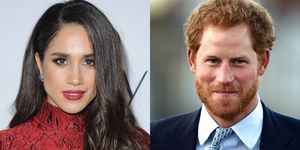 Prince Harry and Meghan Markle Are Engaged!
Mehera Bonner Contributor Mehera Bonner is a news writer who focuses on celebrities and royals.
This content is created and maintained by a third party, and imported onto this page to help users provide their email addresses. You may be able to find more information about this and similar content at piano.io
Advertisement - Continue Reading Below
More From Celebrity
Jennifer Aniston Answered Bizarre Fan Questions
Prince Charles "Really Wants to Meet" Lilibet
Advertisement - Continue Reading Below
Britney Spears Deleted Her Instagram Account
Megan Fox Won't Be Told "What a Woman Should Be"
Jennifer Garner Shared an Emotional Message on IG
Travis Scott Discussed His Parenting Style
Kanye West Unfollowed Kim Kardashian on Instagram
Kate Hudson Is Engaged to Danny Fujikawa
J.Lo & Ben Affleck Kiss in Masks at the Met Gala
Who Is Alexandria Ocasio-Cortez's Partner?