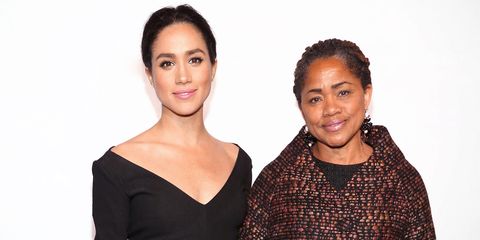 Things we know about Meghan Markle's wedding to Prince Harry: 1) It takes place on May 19. 2) It's happening at St. George's chapel in Windsor Castle. 3) There will be hats.

Other than that, what's inarguably the event of the year is shrouded in mystery and speculation—but when it comes to who is walking Meghan down the aisle, it appears as though she's willing to break tradition. E! reports that Meghan wants her mother Doria Ragland to walk her to the alter instead of her father Thomas Markle.

Typically, brides are "given away" (ew ew ew ew) by their dads—and when Kate Middleton married Prince William she was walked down the aisle by her father Michael Middleton. That said, E! reports that Meghan is hoping to break a few traditions during her wedding—this being one of them.

— The Duke and Duchess of Cambridge (@KensingtonRoyal) November 27, 2017

It should be noted, by the way, that both Doria and Thomas Markle issued a joint statement about Meghan's wedding (read it in the tweet above)—so her dad isn't quite as reclusive as people claim, and appears to have a relationship with his daughter. Get more details on Meghan and Harry's wedding below:

Related Story
Your Official Guide to Meghan and Harry's Wedding
Mehera Bonner Contributor Mehera Bonner is a news writer who focuses on celebrities and royals—follow her on Instagram.
This content is created and maintained by a third party, and imported onto this page to help users provide their email addresses. You may be able to find more information about this and similar content at piano.io
Advertisement - Continue Reading Below
More From Celebrity
Iconic Party Photos From the Past
The Best TV and Movie Wedding Dresses of All Time
Advertisement - Continue Reading Below
40 Celebrity Sisters Who Look So Much Alike
40 Rare Photos of Grace Kelly Through the Years
A Look at Royal Family Portraits Through the Years
The 50 Most Popular Episodes of ‘Friends,’ Ranked