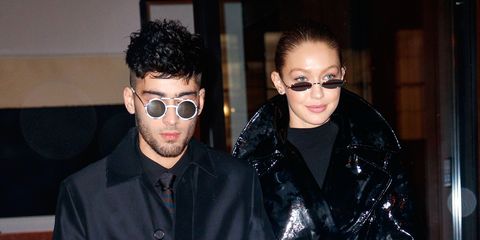 You may have noticed that Gigi Hadid was super excited to celebrate her boyfriend Zayn Malik's recent birthday on Twitter, and decided to share a boomerang of him shirtless and pelvic-thrusting. Which, sure.

What you probably didn't notice is that Zayn seems to be sporting a new chest tattoo which looks a lot like Gigi Hadid's eyes—complete with her signature arched brows.

Romantic, yes, though fans were quick to point out that Zayn also got a tattoo of his ex-girlfriend Perrie Edwards, which he ended up having to cover up.

As far as we know, Gigi does not have reciprocal Zayn eyeballs tattooed on herself at this time.

Related Story
Gigi Hadid and Zayn Malik Channel 'The Matrix'
Mehera Bonner Contributor Mehera Bonner is a news writer who focuses on celebrities and royals—follow her on Instagram.
Advertisement - Continue Reading Below
More From Celebrity
Selena Gomez Sent an Emotional Note to Demi Lovato
What Was in Nick Jonas' Teeth at the Grammys?
Advertisement - Continue Reading Below
Why Isn't Beyonce at the 2020 Grammys?
Watch Demi Lovato's Emotional Grammys Performance
Beyoncé's Pre-Grammys Look
Blake and Gwen Were Too Cute at the Grammys
The Jonas Brothers' Grammys Performance Was a Lot
Alicia Keys Covers 'Someone You Loved'
Lizzo Opens the Grammys With an Epic Performance
Chrissy and John Win Best Dressed at the Grammys