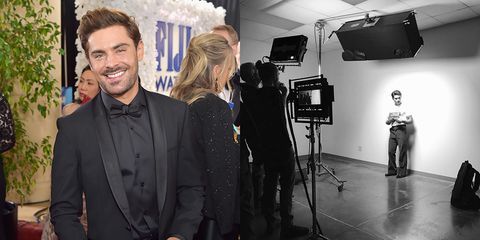 Zac Efron, your Disney crush who grew up to be your regular crush, is taking his career in a new direction. After years of playing variations of the Hot Shirtless Bro (see Neighbors, Neighbors 2, and Baywatch), Efron is taking on the challenging part of infamous serial killer Ted Bundy.

Efron shared a black and white photo of himself from the set of the movie, Extremely Wicked, Shockingly Evil and Vile, simply captioned "Meet Ted."

The photo Efron shared is a wide shot, but fans quickly cropped in to get a closer look at him in character. It's...eery.

Side-by-side photos of Efron in character and the real Bundy only make the picture more chilling.

Zac Efron as ted bundy in his new movie pic.twitter.com/y3pnbJ63go

What's more, the objectively creepy picture of Efron playing one of the most notorious, evil, and manipulative figures in modern history, has stirred up a range of feelings in the Twitterverse.

I feel like Zac Efron playing Ted Bundy is just wrong. Doesn’t fit at all to me.

While some users are confused as to why their hot, hot actor crush is playing a serial killer, others are stepping up to remind everyone just how it was that Bundy was able to be so prolific and successful as a murderer—his charm and good looks. Bundy used his charm to murder dozens of women in the 1970s and he eventually confessed to committing 30 murders across seven states between 1974 and 1978.

The movie, which focuses on the story of Bundy’s crimes, is being told from the perspective of his longtime girlfriend, Elizabeth Kloepfer. Lily Collins will portray Kloepfer in the film and posted her own character shot to Instagram today, captioned, "Meet Liz."

Production on the film starts this month and we already can't wait to see the final product.