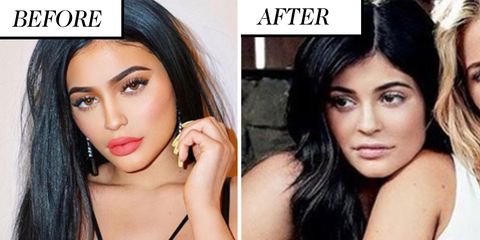 It was the underwear ad heard—seen—‘round the world: The Kardashian/Jenner clan was photographed together in a Calvin Klein ad yesterday for the first time in what feels like a gestational nine months, with notoriously elusive Kylie Jenner finally showing her face.

Fans were quick to point out, though, that not only is Kylie the only sister covering her stomach throughout the photo series, but her trademark lips (you know, the ones that have been continually injected with filler for the last few years), were noticeably smaller, all of which apparently point to the same thing: Kylie Jenner is, in fact, pregnant.

OUR FAMILY. #MYCALVINS. Close like no other. @kimkardashian, @kyliejenner, @kendalljenner, @khloekardashian and @kourtneykardash shot by @willyvanderperre. Discover more at calvinklein.com/mycalvins. ⠀⠀⠀ ⠀⠀⠀ Show us your family and follow #MYCALVINS to see more from around the world.

And listen, we’re fully aware that what’s in someone’s uterus or lips is nobody’s business but their own, and if Kylie wants to take a social media sabbatical for the privacy she deserves, then hey, you do you.

But there’s no hiding the fact that Kylie’s absence from the spotlight has turned the interwebs into an even bigger rumor mill, with fans churning out hypotheses as to where she is and why she left:

Theory: Kylie is hiding her face for a couple months now because temporary lip fillers only last about 6 months and you’re not allowed to get them refilled while pregnant.

Of course, we have no idea when these photos were taken (after all, pregnant Khloé Kardashian looks noticeably un-pregnant in this ad), so maybe the whole Kylie theory is just the result of some lighting tricks, or weird Photoshop, or, um, maybe her belly was just really cold?

Only time will tell—and really soon, because by our calculations, that rumored baby is almost fully cooked. Keep reading to see Kylie’s supposedly “new” lips vs. her old lips, and decide for yourself.

I'm so excited to announce my @kyliecosmetics pop-up shops at @topshop!! My holiday pop-ups will open at 7 Topshop locations across the country, Los Angeles, NYC, Miami, Chicago, Houston, Las Vegas and Atlanta this November. Stay tuned for more!

Chloe Metzger Senior Beauty Editor Chloe Metzger is the senior beauty editor at Cosmopolitan, obsessively writing about new makeup launches, the best hair products (curly girl here; whattup), and the skincare formulas that really work for every skin type (follow her on Instagram to see behind-the-scenes pics of that magazine life).
Advertisement - Continue Reading Below
More From The Best Makeup Tips, Ideas, and Inspiration
13 Super Pretty Valentine's Day Makeup Tutorials
These Makeup Trends Will Dominate the Year
Advertisement - Continue Reading Below
It's Winter, You Need One of These Lip Balms
Makeup Trends for Winter 2019, According to MUAs
We Tried the Runway's Coolest Graphic Makeup Looks
The Beauty Trends of Hot Girl Fall
The Best Drugstore Products Used at NYFW
10 Lip Liners For a Perfect Pout
The Best Foundation Brushes of All Time
How to Get the Glass Makeup Look