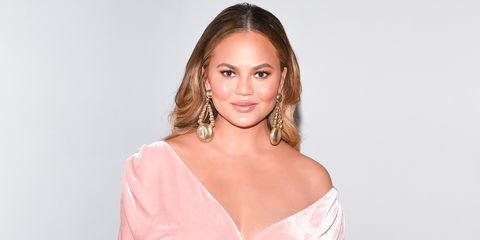 This weekend Chrissy Teigen has once again proven that she's one of the most hilarious people on social media. In a tweet posted on Saturday, Teigen detailed just how much she's enjoying her second pregnancy, with the usual biting humor we're used to from the model.

Teigen started, "This baby is sucking the life from me. Drinking my water, making me dry." Clearly, Teigen is feeling that pregnancy glow that's so often talked about. And she didn't stop there.

This baby is sucking the life from me. Drinking my water, making me dry. Eating my food, making me hungry. Taking my health, making me sick. Why do we create these monsters they want us dead

And she finished up with the pertinent question, "Why do we create these monsters they want us dead"?

Despite her hilarious tweet about the joys of having a baby, Teigen seems to be relishing her second pregnancy.

She famously announced the pregnancy on Instagram in Novemeber 2017 by sharing a cute clip of her daughter Luna mentioning that there was another baby on the way. The model's Instagram caption, "it's John's," set the internet alight, especially at the couple had previously told fans that they were hoping to have another child.

Of course Teigen revealed that Luna's first sibling will be a baby brother, as "that is the embryo we have left." Teigen and husband John Legend have always been extremely open about using IVF to start their family.

Amy Mackelden Weekend Editor Amy Mackelden is the Weekend Editor at HarpersBAZAAR.com, where she writes about entertainment, celebrity news, beauty, and fashion.
This content is created and maintained by a third party, and imported onto this page to help users provide their email addresses. You may be able to find more information about this and similar content at piano.io
Advertisement - Continue Reading Below
More From Celebrity
Iconic Party Photos From the Past
The Best TV and Movie Wedding Dresses of All Time
Advertisement - Continue Reading Below
40 Celebrity Sisters Who Look So Much Alike
40 Rare Photos of Grace Kelly Through the Years
A Look at Royal Family Portraits Through the Years
The 50 Most Popular Episodes of ‘Friends,’ Ranked