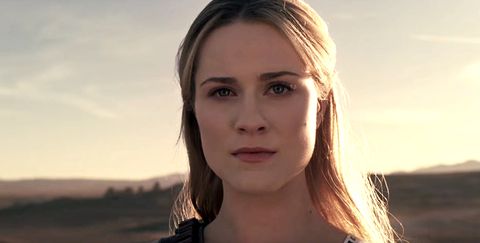 The biggest commercials of the year drop during the Super Bowl, which made it a perfect time for HBO to debut a new Westworld trailer. The series will return on April 22.

The short tease of Season 2 begins with picturesque shots of wild west landscapes and calming voiceover. It almost feels like it could be a Delos commercial for the actual Westworld.

But then things get, you know, creepy and amazing.

The trailer packs a lot of clues into its minute and 39 seconds.

Someone is being brutally tortured:

Bernard is stalked by a phantom-esque robot:

Maeve appears to be leading the Host revolution at Delos HQ:

And the whole thing is narrated by Evan Rachel Wood's Dolores, who informs us that it's time to burn down the human world to make way for the Hosts' world.

Watch the trailer yourself and let your personal countdown to April 22 begin.