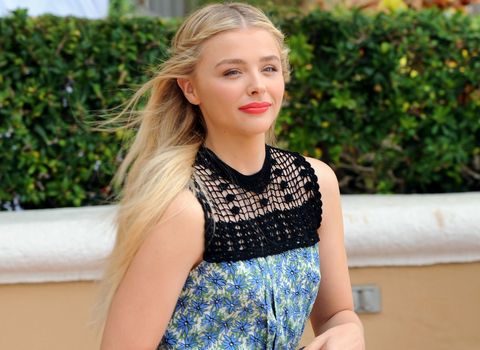 Chloë Grace Moretz is joining the class of young Hollywood actresses to star in live-action remakes of Disney princess movies, which includes Lily James as the title role in Cinderella earlier this year and Emma Watson as Belle in the upcoming production of Beauty and the Beast. The actress confirmed on her Instagram that she has signed on to play Ariel in the classic tale of The Little Mermaid.

"Here it is!!" she writes. "I've been waiting months to tell everyone how excited I am to take on this beautiful journey with Working Title, Universal, and a beautiful script by Richard Curtis. #TheLittleMermaid!!!! Here we go!!!"

While little else is known about the film—especially after director Sofia Coppola bowed out of the project due to creative differences with the studio—but Moretz has apparently been a frontrunner for the part of the spirited songstress mermaid since before Coppola's departure.

We can't wait to see what's in store for this iconic Disney film. Who will play Prince Eric? And more importantly, will Moretz be sporting Ariel's signature scarlet locks anytime soon?

Giphy
Sarah Lindig Senior Digital Editor, Special Projects Sarah Lindig is the senior digital editor, overseeing special projects for Harper's Bazaar.
This content is created and maintained by a third party, and imported onto this page to help users provide their email addresses. You may be able to find more information about this and similar content at piano.io
Advertisement - Continue Reading Below
More From Celebrity
Doug Emhoff Reacts to Kamala Harris's Googling Him
Harry Was Homesick for a While, But Is Happy Now
Advertisement - Continue Reading Below
Chrissy Teigen's Therapist Inspired Her New Hobby
J.Lo Claps Back After Botox Comments
Katie Just Posed in a Shirt Her Boyfriend Designed
Meghan Wasn't Appreciated for Royal Contributions
Harry & Meghan Have Had a Painful Year Since Exit
The Queen's Hot Grandnephew Is a Thirst Trap
Watch Diana Play Impromptu Piano in Rare Clip
Peek Inside the Cambridges' Country Home