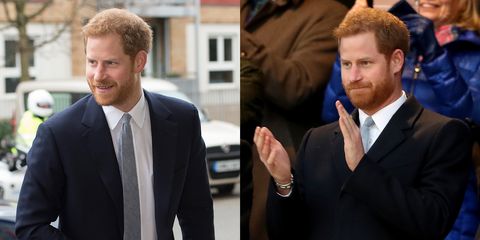 Prince Harry made a solo appearance this weekend, attending the Women's Six Nations to watch England's Red Roses play against Wales. As the Patron of England Rugby, it was important that Prince Harry put in an appearance at the match. And despite flying solo—as fiancée Meghan Markle didn't attend—the prince looked to be in good spirits.

Firstly, he had the company of this very happy looking man:

He got to do some singing:

And he even made this pufferfish face during a tense moment:

Then he got to meet members of the team and their coaches:

Kensington Palace also shared some snaps from his day of sport-related fun:

And, of course, Prince Harry still managed to look dashing, despite not having Meghan Markle on his arm:

Bring on the royal wedding.