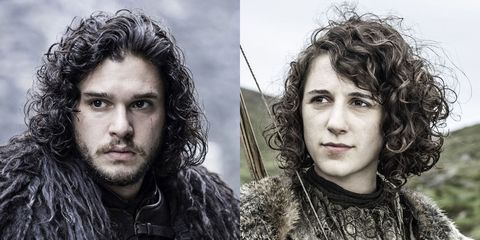 Whether you read the books and then watched the show or just did one or the other, fact is, Game of Thrones is some messed up sh*t in the best way. Oh you love a character? Now he's dead. Oh you think someone's actually going to be happy for once? Hah. Oh you think that one little detail you may have overlooked because it was literally one sentence doesn't matter? Wrong.

At this point there are so many paranoid Game of Thrones conspiracy theories that it's a little hard to keep track. And now that the show is going off-book (damnit George put us out of our misery already), there could be just as many book theories as there are show theories and ugh, our head hurts.

Here, a look at some of the biggest fan theories, ranked from crazy AF to actually, totally plausible. Fasten your fur-lined capes—it's gonna be a wild ride.

There are a lot of theories out there, but this has to be by far the craziest. According to a Reddit user, a merling is a real thing (which it is, in Westeros) but we don't know anything about them. Little Finger has a ship named "The Merling King" and also implies that he has Varys under his control. The user also points out that people assume Varys is a fat man with robes that cover till the bottom of his feet—could he be hiding a tail you guys?! Is Little Finger keeping Varys' secret in return for his help?! IS ANYTHING REAL?

Hodor Says Only "Hodor" for a Reason

In one of the most upvoted theories on Hodor (thanks, Reddit users), a (now deleted) post chronicles some facts about Hodor in such a breezy way that it's hard to argue there isn't *something* to this—though exactly what it means is definitely up in the air. Basically, in the first book you learn that Hodor's actual name is Walder and he is the grandson of Old Nan (the nurse for the Stark kids). No one knows why he says Hodor. Later in the books, Melisandre—AKA the crazy red priestess lady—tells Stannis that the enemy of her god R'hllor, The Lord of Light, is the Great Other. (We don't know if this is that god's name, or if, like Voldemort, it's just a nickname you use to not say his actual name.) Melisandre tells Stannis that the name of the Great Other must never be spoken. And while R'hllor is usually associated with fire, light, and heat, the Great Other is associated with darkness and cold. In Norse Mythology, the god of winter is named Höðr.

What does this mean? Everyone has a theory about *this* theory—that Hodor might actually be the Great Other. Or that Hodor was traumatized in his childhood by something connected to the Great Other, and it's the only thing he can say. Or that he keeps saying it as a warning to everyone else. Who knows. Hodor.

Theon Murdered His Own Son

Theon, in a weird/warped protective stance (or to save his own skin), murders two brothers to pass their bodies off as Bran and Rickon Stark in season two. In A Dance With Dragons, Theon thinks about how he slept with their mother before: "Theon did not want to think about their mother. He had known the miller's wife for years, had even bedded her. Big heavy breasts with wide dark nipples, a sweet mouth, a merry laugh." Seeing as Theon would have only been 12 when the first son was born, many think that the younger of the two was Theon's kid—making him a kinslayer. Fans think this explains his terrible bad luck since taking Winterfell, as we all know how the gods feel about slaying one of your own. (If you don't—not good. Not good at all.)

In season five, Cersei has a flashback where she visits Maggy, a witch, and gets her fortune told. With her last question, she learns that after her tears have "drowned" her, "the valonqar shall wrap his hands about your pale white throat and choke the life from you." Valonqar means "little brother" in High Valyrian, and Cersei immediately assumes this means her littlest brother Tyrion. But, even though she and Jaime are twins, Jaime was technically born after her–making him younger. And let's be real—getting offed by your brother whom you used to get off and then dismissed/rejected would be very Game of Thrones-y.

A pretty popular theory is that Sandor Clegane—AKA the Hound—is not dead even though we say Arya leave him after Brienne had kicked him off a cliff. Instead, he becomes a gravedigger—something that we get to hear more of in the book, as Brienne eventually comes across a huge man digging graves for a monastery, wearing a hood with injuries that would correspond to the Hound's. His brother, Gregor—AKA the Mountain–was definitely dead, but now seems to have turned into some sort of zombie/Frankenstein experiment thanks to Cersei's go-to/former maester Qyburn. The idea is that the the Hound will finally seek revenge on his abusive brother in a showdown named by fans as the "Cleganebowl." Okay then.

Tyrion Isn't a Lannister—He's a Targaryen

In other Lannister theories (and one that definitely gives more credo to no. 5), Tyrion is not a Lannister, he's a Targaryen. Some fans have surmised that Tyrion is actually the son of Mad King Aerys Targaryen and Joanna Lannister. In A Dance With Dragons, Ser Barristan Selmy tells Daenerys that the Mad King was head over heels for Joanna, and that they had something between them (possibly even after Joanna and Tywin were married).

Prince Aerys ... as a youth, he was taken with [Joanna]. When she and Tywin wed, your father drank too much wine at the wedding feast and was heard to say that it was a great pity that the lord's right to the first night had been abolished. A drunken jape, no more, but Tywin Lannister was not a man to forget such words, or the...liberties your father took during the bedding.

But while that argument is compelling, some take this to mean that Mad King Aerys is actually the father of Cersei and Jaime—as they were born first and it would be pretty Game of Thrones in spirit if Tywin–who loved his twins but hated Tyrion–actually had only one legitimate heir: the one he hated.

Jon Snow Is a Twin—And We've Met His Sister

Okay, so this hinges on theory #1 being true, so we'll just explain both real fast. Basically, Jon Snow is a Targaryen—the son of Lyanna Stark (Ned's sister) and Rhaegar Targaryen. The theory states that when Ned arrives at the Tower of Joy during Robert's Rebellion, he finds his sister in a "bed of blood," (childbirth?!) and that she dies shortly afterward, asking her brother: "Promise me, Ned."

To get to Lyanna, six men entered but only two survived—Ned Stark and Howland Reed. Though we've never met Howland, Jojen and Meera Reed both turn up later in the series to help Bran Stark on his mission to find the three-eyed raven. In the books, Meera and Jon Snow both have the same birth dates (the same year Lyanna died), similar looks (dark hair/slim), and c'mon–we all like a plot twist.

Jon Snow Isn't a Bastard at All—He's a Targaryen

As we've (sort of) gone over in not much detail, the biggest fan theory is that Jon Snow is not a bastard—he's the son of Lyanna Stark and Rhaegar Targaryen. There is so much evidence for this, that it seems a little hard to argue. But one of the most convincing is that early on, Arya and Jon are said to look so much alike that Sansa jokes Arya is a bastard like Jon. Arya is then said to resemble Ned's sister, Lyanna. DO YOU SEE NOW?

WTF factor: you're crazy if you *don't* believe this