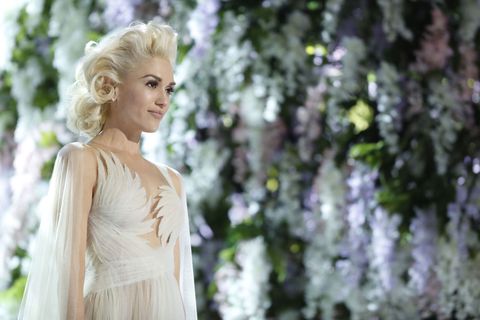 Since The Voice coaches Blake Shelton and Gwen Stefani officially became an item off-screen, they've made no effort to hide that fact on-screen. Yesterday, their love fest was on full display when Gwen performed "Used to Love You," the breakup ballad inspired by her divorce:

But the compliments began earlier that day. Blake told Entertainment Tonight just how blessed he is that Gwen is in his life.  "I'm thankful for Gwen for tons of reasons, but mostly because she makes us all look a whole lot better on this show," he said before adding the outfit she'd wear performing "Used to Love You" was especially spectacular. "I saw what she's going to be wearing for this performance tonight, it's stunning. It's so beautiful."

Pharrell Williams, another Voice judge, tried to compete with Blake's gushing praise. "I am grateful that Gwen is in the most free place that I feel like she's ever been since I've known her as a human being. Not just creatively, but just as a human being, she's floating right now. "Nice try, Pharrell.