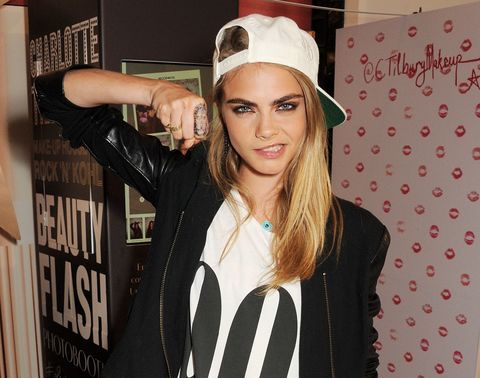 Earlier this week, Cara Delevingne had a particularly appalling run-in with the paparazzi. Taking to Twitter, she ranted about the intrusive incident, apologized for any forthcoming photos of her butt, and schemed her next move.

Some disgusting so-called 'human' with a camera tried to take a picture up my skirt... 'Welcome home' 🇬🇧

If a picture tomorrow comes out soon of my ass.... I sincerely apologise!

So last night, in an act of hilarity/retribution, Delevingne and St. Vincent plotted a wet and wild stunt for said "disgusting so-called 'humans'." The model-turned-actress and her girlfriend headed out armed with water guns, drenching the photogs as they tried to snap her picture.

"Pay back 💦" Delevingne wrote on Instagram with a video of the sneaky super-soaker attack.

Hey, at least (for the paps' sake) she didn't go with the egg idea, right?