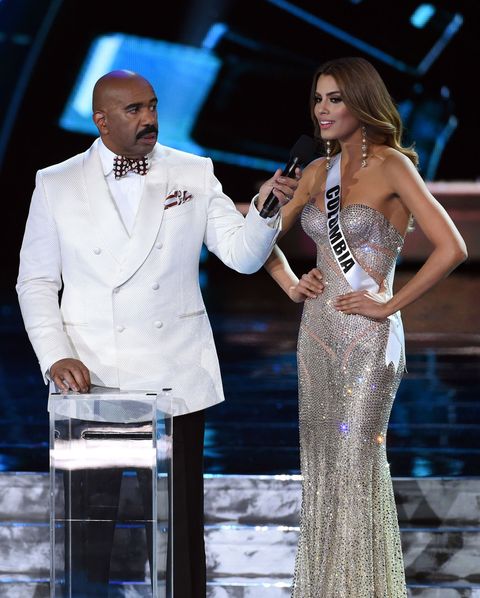 It's been almost a month since Miss Universe 2015 host Steve Harvey crushed Miss Colombia, Ariadna Gutierrez's dreams by incorrectly naming her the winner of the pageant—when, really, the crown belonged to Miss Philippines.

While he's said sorry on social media and even poked fun at his own meme-inspiring flub, Harvey is still in search of Gutierrez's forgiveness. So he invited the beauty queen on The Steve Harvey Show for a two-episode special Monday and Tuesday called Miss Universe: The Truth to ask for it.

"This has caused a lot of sleepless nights for me," Harvey says in the promo clip above. "I didn't do any interviews until I could talk to the two people who were affected the most, Pia and Ariadna. No matter how tough it was for me, I can't imagine how it was for these two women. This finally gives me a chance to have a moment of closure."

According to People, Gutierrez will appear in part two of the pre-taped special where she tells Harvey how his snafu has affected her—and if she can find it in her heart to accept his apology.

Whether or not Miss Colombia is willing to make amends, the rightful Miss Universe Pia Alonzo Wurtzbach is more than ready to move on. "Don't beat yourself up for this anymore," she tells Harvey in a preview for part one. "Let's move forward, let's just be happy."

Advertisement - Continue Reading Below
More From Celebrity
Kate Middleton & Michelle Obama Use This $64 Cream
A Full Timeline of Tyler C. & Hannah B.
Advertisement - Continue Reading Below
Blake and Ryan Donate $400K to NY Hospitals
Prince William May Work as an Air Ambulance Pilot
Harry Is Likely to Get U.S. Diplomatic Status
Harry Was Forced to Give Up His Military Titles
Ariana Grande Revealed Her Natural Curls
Fans Love This Accident Meme of Queen Elizabeth
Kate and Will Are Symbolically Leading Monarchy
Meghan & Harry Posted Their Last Sussex Instagram