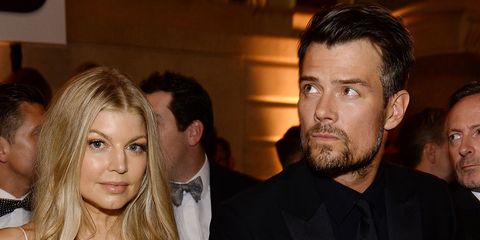 On February 18, Fergie took centerstage at the NBA All-Star game and belted out a very interesting version of the national anthem. The singer's bluesy, sexy take on "The Star-Spangled Banner" drew a storm of criticism, mostly on Twitter.

Fergie later apologized for the performance, saying in a statement, "I’ve always been honored and proud to perform the national anthem and last night I wanted to try something special for the NBA. I’m a risk taker artistically, but clearly this rendition didn’t strike the intended tone. I love this country and honestly tried my best."

During an appearance on The Ellen DeGeneres Show, Fergie's ex, Josh Duhamel, weighed in on the performance.

"I think she would probably admit that it was not her best work, but the girl is crazy talented. She really is. She's an amazing woman—an amazing human being, really," Duhamel said. "It's hard to see somebody you care about get beat up like that. That's the business, you know? You're in this business. You put yourself out there. Sometimes you win. Sometimes you lose."

"Trust me, she's fine," he added. "She is about as resilient as they come."

This content is imported from YouTube. You may be able to find the same content in another format, or you may be able to find more information, at their web site.
Kayleigh Roberts Contributor Kayleigh Roberts is the weekend editor at Marie Claire, covering celebrity and entertainment news, from actual royals like Kate Middleton and Meghan Markle to Hollywood royalty, like Katie Holmes and Chrissy Teigen.
This content is created and maintained by a third party, and imported onto this page to help users provide their email addresses. You may be able to find more information about this and similar content at piano.io
Advertisement - Continue Reading Below
More From Celebrity
The Palace Just Shared Prince Louis Birthday Pic
Meghan and Harry Talked Every Day During UK Trip
Advertisement - Continue Reading Below
J.Lo Wishes A-Rod's Daughter a Happy Birthday
Irina Shayk Shared a Rare Photo of Her Daughter
John Travolta Talked Dancing With Princess Diana
Meghan Markle and Archie Speak to the Queen
Who Is Alexandria Ocasio-Cortez's Partner?
Did Charles, Harry, and William Mend Relationship?
The Kardashians' Most Body-Confident Nude Shoots
Chrissy Teigen + Meghan Markle Spoke About Loss