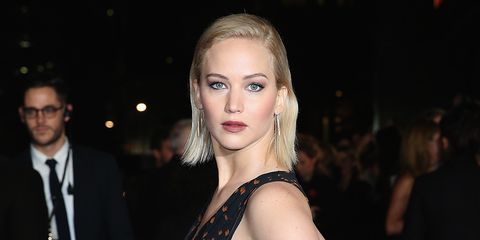 Jennifer Lawrence is an objectively successful human. The 27-year-old actress won her first Academy Award when she was just 22 and she's also been nominated three other times. It turns out that she didn't have a traditional path to success, though. In a new interview with 60 Minutes, Lawrence revealed that she dropped out of school when she was just 14.

"I dropped out of middle school. I don't technically have a GED or a diploma. I am self-educated," she explains in the interview.

When asked if she regrets the decision, she says no, she doesn't. At the time, she didn't want any distractions—not even friends—from pursuing her career.

Jennifer Lawrence says she dropped out of middle school. The Oscar-winning actress tells Bill Whitaker she didn't want anything getting in the way of her career. Sunday on 60 Minutes.https://t.co/BgAj4TcRiV pic.twitter.com/MjzH5Bgu8d

"No. I really don't. I wanted to forge my own path. I found what I wanted to do, and I didn't want anything getting in the way of it. Even friends, for many years, were not as important to me as my career. I mean, from the age of 14."

Lawrence says she never felt like she fit in at school and that she struggled with academics. When she found acting and felt, for the first time, like she had a real aptitude for something, she wanted to put everything into pursuing it.

"I struggled through school. I never felt very smart," she says. "And when I'm reading the script and I feel like I know exactly what it would look like if somebody felt that way, that was the whole part of my brain that I didn't even know existed—something that I could be confident in and I didn't want to let it go."

Of course, it took some major convincing to get her parents on board with the decision.

"It was just an overwhelming feeling of 'I get this. This is what I was meant to do,'" she says. "And to get people to try to understand that, when you're 14-years-old wanting to drop out of school and do this, and your parents are just like ‘You're out of your mind.'"

Thankfully, the whole acting thing worked out for her.

Kayleigh Roberts Contributor Kayleigh Roberts is the weekend editor at Marie Claire, covering celebrity and entertainment news, from actual royals like Kate Middleton and Meghan Markle to Hollywood royalty, like Katie Holmes and Chrissy Teigen.
This content is created and maintained by a third party, and imported onto this page to help users provide their email addresses. You may be able to find more information about this and similar content at piano.io
Advertisement - Continue Reading Below
More From Celebrity
Kaavia Talks to a Bee in an Adorable IG Video
David Harbour on Being Stepdad to Lily Allen's Kid
Advertisement - Continue Reading Below
Ben Affleck Is "Getting to Know" J.Lo's Kids
Salma Hayek's Owl Had a Mishap With Harry Styles
Princess Diana Always Dreamed in Living in Cali
Angelina Jolie Was Spotted Leaving Her Ex's Place
What Happens on Katie's Season?
Ben Affleck Had Dinner With J.Lo and Her Kids
Jessica Biel Talked "Secret COVID Baby" Phineas
Katie Holmes Paired Baggy Jeans With a White Tank