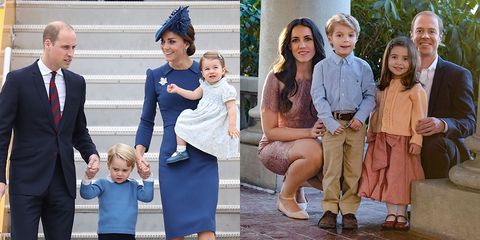 Lifetime revealed its vision of William and Kate's family for the upcoming Harry & Meghan: A Royal Romance today. While we're sure the actors and producers and costumers and everyone else involved in the production are perfectly lovely, we can't get over the glaring inaccuracies in the image. Here is everything wrong with Lifetime's Will, Kate, George, and Charlotte.

Even shorts under this heavy winter coat:

It's not just a fashion statement; it's royal tradition. In keeping with this tradition, we probably won't see George in full-length pants until he's eight years old.

3. Kate would never wear flats with that dress.

Not even just after giving birth.

4. Literally everything about William except the hair.

The hair is honestly only kind of right.

In the Lifetime photo, "Kate" stands next to "George," while "William" stands next to Charlotte. This is never the case in public appearances by the actual royal family.

Sometimes Will and Kate are in the middle, with George next to Will and Charlotte next to Kate:

Sometimes the kids are in the middle with their same-sex parent by their sides:

Sometimes they're staggered William, then George, then Kate, then Charlotte:

This is purposeful. As Daily Mail reports, William always stands with George during public appearances in order to help prepare him to one day take the throne.

This isn't a reflection on the royal family really (presumably, they would be polite and pose wherever they were asked to, even if it were dusty), but damn, look at that floor. A PA and a mop would have solved this one, Lifetime.

Kayleigh Roberts Contributor Kayleigh Roberts is the weekend editor at Marie Claire, covering celebrity and entertainment news, from actual royals like Kate Middleton and Meghan Markle to Hollywood royalty, like Katie Holmes and Chrissy Teigen.
This content is created and maintained by a third party, and imported onto this page to help users provide their email addresses. You may be able to find more information about this and similar content at piano.io
Advertisement - Continue Reading Below
More From Celebrity
Britney Spears Dedicated a Message to Her Sons
Meghan's Face "Lights Up" When Harry Walks In
Advertisement - Continue Reading Below
Kate Middleton, Millennial, Wore Skinny Jeans
'Sex and the City' Star Willie Garson Dies Age 57
Princess Eugenie's Son Got to Meet Prince Philip
Ashley Graham Is Having Twin Boys
Gabrielle Union Danced Topless at a Window
Ben Affleck Is "in Awe" of Jennifer Lopez
Princess Beatrice Has Given Birth to a Baby Girl
Gigi Hadid's Mom Shared Sweet Pics of Khai