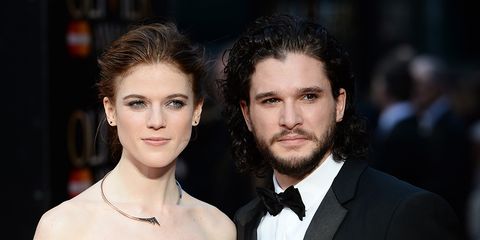 As a general rule, Game of Thrones fans fall into one of two camps: The people who are desperate for any morsel of information about Season 8 and the ones who avoid spoilers like they're the actual plague.

Rose Leslie is the second kind.

The actress, who played fiery wildling Ygritte on the show for three seasons, is engaged to her former costar/onscreen love interest Kit Harington (aka Jon Snow)—in case you somehow hadn't heard. With that kind of access, Rose could learn all of Thrones' most spoilery secrets, but she's not interested, thankyouverymuch.

In fact, she has forbidden Kit from revealing any spoilers about Season 8 and she's set some pretty intense rules to stop him from accidentally giving anything away.

"I for sure ask Kit not to show me his excitement after he has read an episode, simply because I don’t want to read anything in his eyes," she told Entertainment Weekly. "I know the anticipation is killing a lot of people, and my God the build-up is fantastic. I can’t wait until next year. So when he’s at the other end of the room and reading the episode, it’s like, no…we are not going to have eye contact for a long time. Go make a cup of tea. Calm down."

Proof that literally no one wants to hear all the details about their S.O.'s job. Sadly, Rose will have to stay on spoiler patrol for a while longer—Game of Thrones Season 8 isn't set to finish filming until this summer.