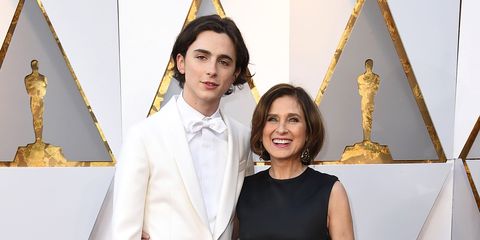 Jennifer Lawrence may have a big crush on Timothée Chalamet, but the only woman on his arm at this year's Oscars is his mom, Nicole Flender. Sorry, J. Law. Maybe next year?

The 22-year-old Call Me By Your Name star, who is nominated for Best Actor, stunned at the pre-award show red carpet sporting an all-white tuxedo, and Flender kept it chic in all-black gown with a midriff cutout.

In January, Chalamet shared on Instagram that he has a habit of taking his mom to award shows. In the photo below, the young actor said he took "THE QUEEN" to the Screen Actors Guild Awards five years ago.

This year, he kept the tradition alive and well by once again bringing his mom as his date to the 24th annual SAG Awards.

On Sunday night, the budding actor, who also appeared in Lady Bird, posed with Flender, his Call Me By Your Name co-star Armie Hammer and Hammer's wife Elizabeth Chambers at the Oscars red carpet.

Should Chalamet win for Best Actor at the 90th annual Academy Awards, he will overtake Adrien Brody as the youngest Best Actor winner ever. Brody won Best Actor for 2002's The Pianist at the age of 29.

On Jimmy Kimmel Live!, Chalamet told 2018 Oscars host Jimmy Kimmel, in the video below, that he planned to invite his father, mother and sister to the award show.

When Kimmel asked who will sit in the "key seat" right next to Chamalet, the nominee responded with a laugh, "We would all literally not be here without our mothers."