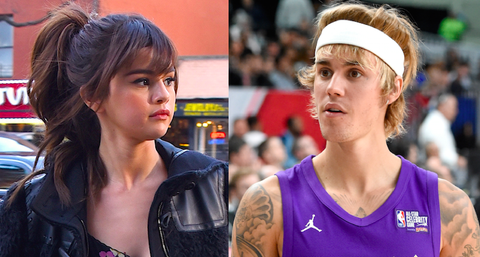 Much like Ross and Rachel before them, Selena Gomez and Justin Bieber are taking a break from their relationship while they work some things out.

The pair are reportedly giving each other a little space, with a source telling E!, "They were having a lot of little disagreements recently and one fight in particular blew up and caused them to decide to 'break up,' however, they've been in contact the entire time and their feelings for each other have not changed."

Selena and Justin in the early days of their relationship, circa 2012.
Getty Images

E!'s source claims the couple will "absolutely" get back together, but needed time away from one another. (Though it should be noted that Selena recently wished Justin happy birthday on Instagram.)

"They both have expressed that they have been feeling overwhelmed with a lot of pressure that has come with their public relationship, and haven't been seeing eye to eye on things," a source tells E!, adding that Selena has been trying to "mend" her relationship with her mom Mandy Teefey.

For her part, Teefy is reportedly not thrilled about Justin and Selena's reunion.

Related Story
Jelena Spotted Kissing in Jamaica at Wedding
Mehera Bonner Contributor Mehera Bonner is a news writer who focuses on celebrities and royals—follow her on Instagram.
Advertisement - Continue Reading Below
More From Celebrity
Rihanna Went Big With Her 32nd Birthday Party
47 Really and Truly Adorable Celebrity PDA Moments
Advertisement - Continue Reading Below
Dakota Johnson Rocks Gucci Suit in Milan
The Cast & Director of 'Cruel Intentions' Reunite
Prince Harry Spotted on a Grocery Run in Canada
Kanye West Leaves Kim Kardashian in an Elevator
Channing Tatum Is "Happy" for Jenna Dewan
Inside Chrissy Teigen and John Legend’s Home
A Look at Royal Family Portraits Through the Years
Are The Weeknd's 'After Hours' Lyrics About Bella?