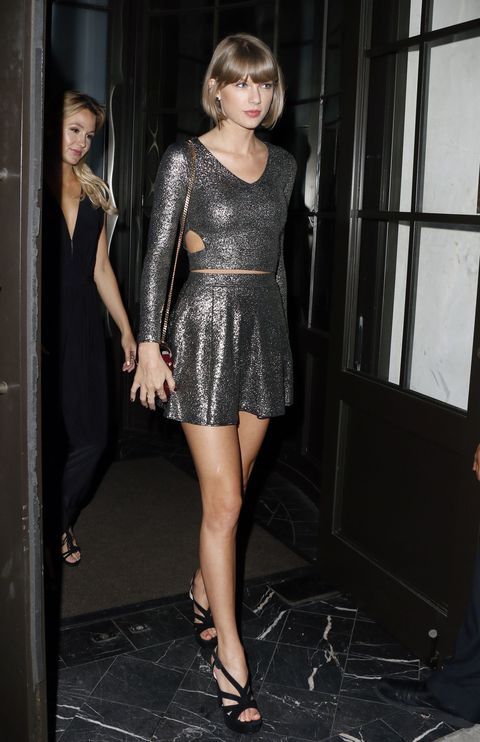 Taylor Swift, queen of crop tops and dorky dance moves, got the chance to show off both this weekend in Las Vegas. The pop star wore her glitziest, Sin City-est, cut-out crop top and mini skirt set—as one does in Vegas—before dancing and singing the night away at Calvin Harris's show with Karlie Kloss, Serayah, Alana Haim and childhood friend Britany Lamanna (whose wedding she recently was maid of honor at) all by her side.

While her Scottish boyfriend played his hits, Swift got in full club-girl mode. (I mean, hey, she dressed the part.) There were hands thrown in the air:

There was lip-synching to Rihanna's "We Found Love" with her new BFF of the night:

There were group selfies with the #squad:

There were more hands thrown in the air:

And did we mention the sparkles? … And the cut-outs?

Between her Vegas nightclub outing and her recent bikinis-and-sunshine beach vaca, Taylor Swift is really taking us back to our college days lately (except chicer and without the sunburn or hangover). She's definitely having the best Spring Break ever.

Sarah Lindig Senior Digital Editor, Special Projects Sarah Lindig is the senior digital editor, overseeing special projects for Harper's Bazaar.
This content is created and maintained by a third party, and imported onto this page to help users provide their email addresses. You may be able to find more information about this and similar content at piano.io
Advertisement - Continue Reading Below
More From Celebrity
J.Lo Reunites with A-Rod for Some Instagram PDA
Shop Meghan's Stunning $30 Summer Dress
Advertisement - Continue Reading Below
Duchess Kate Wears a Sleek Green Blazer
Meghan & Harry Update Archewell Website
Will Is in the Dark About Sussex/Oprah Interview
Oprah Says Her Sussex Interview Is Her Best Ever
Chelsea Handler Skied Naked for Her 46th Birthday
How Kristen Stewart Is Prepping to Play Diana
How to Make the Queen's Favorite Cocktail
The Queen Told Harry to Uphold His Family Values