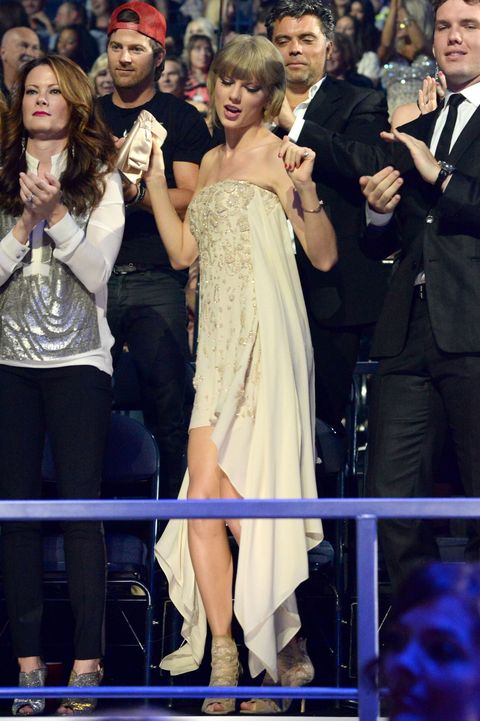 It's universally acknowledged that Taylor Swift's thing is dancing like no one's watching at awards shows where, you know, everyone *is* watching.

At last night's 2015 Brit Awards the story was no different. Swift unabashedly shimmied, shook, and swayed to live performances from Kanye West, Sam Smith, Ed Sheeran, and Madonna. At one point during West's set, she even got the notoriously dance-phobic Kim Kardashian—the latest inductee of Swift's famous-girl Illuminati, no doubt—to shake what Kris Jenner gave her.

Naturally, the subsequent GIF launched a thousand retweets, but also got us thinking about every instance in which Swift busted a move (or like, ten) amidst fellow famous folk. Here, we take a look back and pour one out for all our fellow nerdy dancers, because Swift somehow makes it look so good.

6. At the 2012 Nickelodeon Kids' Choice Awards with Selena Gomez and Katy Perry

7. At the 2012 Nickelodeon Kids' Choice Awards with Flo Rida

8. At the 2013 MTV Video Music Awards with Selena Gomez