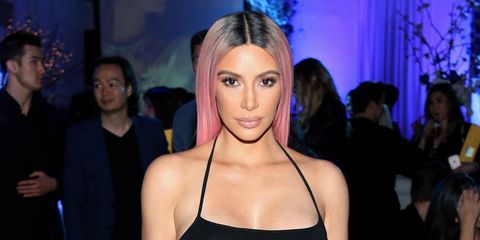 Kim Kardashian just gave us another insight into what life is like now that she has her third child, Chicago West.

Chicago, or Chi as she's apparently known, was born on January 16, 2018, via surrogate. Our first look at Kim Kardashian and Kanye West's new baby came in Kylie Jenner's birth announcement video. And our next glimpse of Chicago was in a super cute shot shared by Kim on social media, in which mother and daughter had a pink mouse filter on.

And now, Kardashian has shared the sweetest close-up of baby Chicago, along with the caption, "Morning cutie." Not only does she look wide awake in the photo, she has the most gorgeous head of hair, and looks genuinely ecstatic to see her mom:

She also appeared on Kim's Snapchat with a cute bear filter:

Kardashian has spoken at length about the surrogacy process, and the challenges she faced during her own pregnancy. Speaking to Entertainment Tonight, she revealed:

"You know, it is really different. Anyone that says or thinks it is just the easy way out is just completely wrong. I think it is so much harder to go through it this way, because you are not really in control. You know, obviously you pick someone that you completely trust and that you have a good bond and relationship with, but it is still...knowing that I was able to carry my first two babies and not, you know, my baby now, it's hard for me. So, it's definitely a harder experience than I anticipated just in the control area.