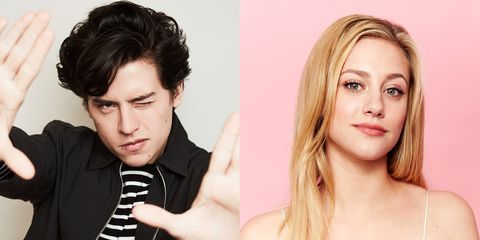 Riverdale stars Cole Sprouse and Lili Reinhart are rumored to be dating, and yes, we've been gathering evidence that Bughead exists IRL—even when they continually deny (or, rather, hide) it. So, of course Sprouse had the same ol' answer for a fan who questioned the couple yesterday at PaleyFest in L.A.

The brave fan stood up and asked Sprouse the three words he dreads: "Are you dating?"

This is what happens when a fan asks if #Riverdale’s Lili Reinhart and Cole Sprouse are dating IRL. We’ve heard this (answer) before... pic.twitter.com/Q67EHKNwJ4

Pulling the mic on his jacket close to his mouth, he answered in a deep voice, "No comment." The crowd erupts with excitement, mainly because Sprouse flashes a nervous, toothy smile, which was all the evidence we needed. Also, "no comment" always means yes. Meanwhile, Reinhart stayed quiet.

In September, Sprouse addressed the idea of him and Reinhart as a couple: "Since the show began, people have wanted Lili and I to be together," Sprouse said in an interview with Entertainment Weekly.

He continued, "Truthfully, it's very pleasing that people talk about Lili and I in that way...because it means that we're resonating so strongly that people really want that to be true."

There's no denying a strong connection, which Sprouse and Reinhart obviously have on the show and in real life. We're shipping Bughead, as we're sure you are too.

Getty Images
Related Story
Cole Definitely Loves Kissing Lili!
Alex Warner
This content is created and maintained by a third party, and imported onto this page to help users provide their email addresses. You may be able to find more information about this and similar content at piano.io
Advertisement - Continue Reading Below
More From Celebrity
Here's Blue Modeling Icy Park Like a Pro
Selena Gomez Photographed Flipping Off Paparazzi
Advertisement - Continue Reading Below
How Kate and Will Feel About the Sussex Oprah Chat
Serena Williams Stuns in a Glamorous Red Robe
Sophie Turner and Joe Jonas Took the Cutest Selfie
Bella Hadid Fell on the Runway & Adorably Reacted
Sussexes' Philanthropic Project Hits a Milestone
Celebs That You Forgot Were on MTV Shows
35 Unforgettable Royal Wedding Scandals
The Best TV and Movie Wedding Dresses of All Time