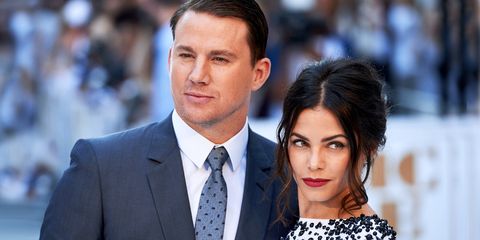 Channing Tatum and Jenna Dewan shippers need to take a seat for this one: The beloved couple, who announced their split earlier this week on Instagram, do not appear to be bound for romantic reconciliation.

While hopeful fans clung to unclear language in the split announcement like comments about love being "a beautiful adventure that is taking us on different paths for now," sources close to the couple say they are not getting back together.

"It’s not anything rushed. They will not get back together, but they will continue to be the best parents to Everly. The fact that they get along is everything," a source told People, assuring the publication that Channing and Jenna had put a lot of thought into their decision to separate before announcing it to the world.

"The focus is their daughter,” the source continued. "Like other couples, they have had arguments and disagreements, but they were always very conscious about giving their daughter lots love and a great life."

The couple, who married in 2009, welcomed their daughter, Everly in 2014 and are committed to amicably coparenting her going forward.

A second source told People that Channing and Jenna's decision to separate was actually made harder by the fact that neither of them made any mistakes that led to the split. Rather, they just fell out of love and realized their relationship had become platonic.

"They honestly do still love each other and that’s not just for show. That love turned more into a friendship rather than the passion they felt when they first met and fell in love," the second source said. "That almost made it harder for them to decide to separate because there weren’t any huge issues, and there’s not one person to point a finger at as the one who screwed up."

Kayleigh Roberts Contributor Kayleigh Roberts is the weekend editor at Marie Claire, covering celebrity and entertainment news, from actual royals like Kate Middleton and Meghan Markle to Hollywood royalty, like Katie Holmes and Chrissy Teigen.
This content is created and maintained by a third party, and imported onto this page to help users provide their email addresses. You may be able to find more information about this and similar content at piano.io
Advertisement - Continue Reading Below
More From Celebrity
Here's Blue Modeling Icy Park Like a Pro
Selena Gomez Photographed Flipping Off Paparazzi
Advertisement - Continue Reading Below
How Kate and Will Feel About the Sussex Oprah Chat
Serena Williams Stuns in a Glamorous Red Robe
Sophie Turner and Joe Jonas Took the Cutest Selfie
Bella Hadid Fell on the Runway & Adorably Reacted
Sussexes' Philanthropic Project Hits a Milestone
Celebs That You Forgot Were on MTV Shows
35 Unforgettable Royal Wedding Scandals
The Best TV and Movie Wedding Dresses of All Time