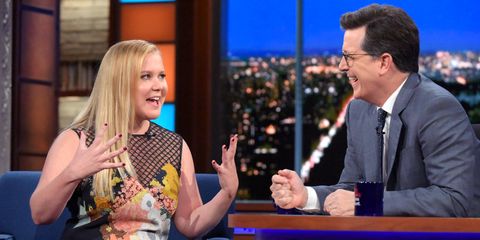 Amy Schumer revealed that she'd secretly wed chef Chris Fischer in a surprise wedding back in February, and now she's finally giving us all of the details about their honeymoon.

On last night's The Late Show With Stephen Colbert (via E!), Schumer explained that her honeymoon with Fischer involved ten days of traveling.

As she told Colbert:

"He's a chef, so he was cooking in Sonoma at Scribe Vineyards. So, I followed him there. Then, he was cooking at a festival in Milan, and I heard that they invented pasta and wine. So, I've just been kind of following him around getting drunk."

Basically, Schumer's honeymoon sounds all kinds of blissful, especially if you enjoy pasta and wine, which is everyone, right?

Colbert joked that not everyone eats carbs, to which Schumer recoiled in mock-horror and shock.

As for married life, it sounds as though it totally suits the Trainwreck star, who knew that Fischer was special because she wanted to "partner up with this guy," something that she says hadn't happened before. Schumer also said that she's letting Fischer see all of her flaws, "but that's so cool, because they can't leave."

News of Schumer's secret wedding broke in US Weekly back in February 2018, with the publication revealing that the couple married in a private wedding in Malibu on February 13. Celebs including Jennifer Lawrence attended the secret nuptials, and Schumer subsequently released her wedding photos on Instagram.

And it's adorable to finally hear about Schumer and Fischer's carb-and-wine fueled honeymoon.

Related Story
Trailer for Amy Schumer's 'I Feel Pretty' Movie
Amy Mackelden Weekend Editor Amy Mackelden is the Weekend Editor at HarpersBAZAAR.com, where she writes about entertainment, celebrity news, beauty, and fashion.
This content is created and maintained by a third party, and imported onto this page to help users provide their email addresses. You may be able to find more information about this and similar content at piano.io
Advertisement - Continue Reading Below
More From Celebrity
Marvelous Women Scarlett Johansson & Florence Pugh
Gigi Shares Glimpse at Baby's Wardrobe
Advertisement - Continue Reading Below
Matthew McConaughey and His Son Are Twinning
Ashley Graham Opened Up About Sex After Childbirth
Brad Pitt and Nicole Poturalski Have Broken Up
Chrissy Teigen Shared a Sweet Video With Luna
EmRata Displayed Her Bump in an Open Button-Down
Harry Sent a Legal Warning Over "False" Article
Chrissy Teigen Talked About Her Baby Loss Photos
Chrissy Teigen Opens Up About Her Loss