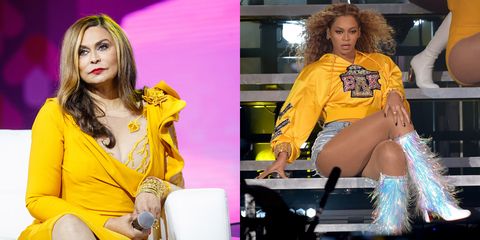 Beyoncé made history at Coachella last weekend. The singer took the stage for a two-hour show that was nothing short of awe-inspiring, performing 26 songs spanning her entire career and bringing out husband Jay-Z, sister Solange, and her former Destiny's Child bandmates as special guests.

Bey's Coachella performance also honored black culture and Historically Black Colleges and Universities—something that her mom, Tina Knowles-Lawson, admits she was nervous about.

In an Instagram post honoring her daughter's infinitely praise-worthy performance, Tina shared a quote from Alisa Adamson Profit which summed up beautifully just how important and groundbreaking Beyoncé's Coachella set was. She then shared the worries she had about the performance when her daughter conceived of it—and Bey's amazing response.

"I told Beyoncé that I was afraid that the predominately white audience at Coachella would be confused by all of the black culture and Black college culture because it was something that they might not get," Tina wrote. "Her brave response to me made me feel a bit selfish and ashamed."

Are you sitting down? Because you should be for Bey's powerful response.

"She said, 'I have worked very hard to get to the point where I have a true voice and at this point in my life and my career I have a responsibility to do whats best for the world and not what is most popular,'" Tina continued. "She said that her hope is that after the show young people would research this culture and see how cool it is, and young people black and white would listen to 'LIFT EVERY VOICE AND SING' and see how amazing the words are for us all and bridge the gap. She also hopes that it will encourage young kids to enroll in our amazing Historically Black Colleges and Universities. I stand corrected."

Kayleigh Roberts Contributor Kayleigh Roberts is the weekend editor at Marie Claire, covering celebrity and entertainment news, from actual royals like Kate Middleton and Meghan Markle to Hollywood royalty, like Katie Holmes and Chrissy Teigen.
This content is created and maintained by a third party, and imported onto this page to help users provide their email addresses. You may be able to find more information about this and similar content at piano.io
Advertisement - Continue Reading Below
More From Celebrity
The Royals Refused to Fact Check 'The Crown'
Charles' Friend Says 'The Crown' Is Propaganda
Advertisement - Continue Reading Below
Peacock Apologizes for Selena Gomez Kidney Joke
Jessica Mulroney Says Meghan FaceTimes Her A Lot
Kate Might Be Wearing This Gucci Blouse Backwards
Gigi Hadid Kisses Her Baby Girl's Head in New Pic
Kate Middleton Wears an Oversized Barbour Jacket
J.Lo's New Song "In the Morning" Is Sexy AF
The Queen Has Launched Her Own Gin
How Celebs Are Celebrating Thanksgiving This Year