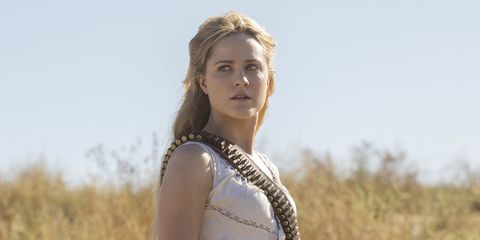 HBO is making good on its promise to fix the pay disparities on its many popular series. For Westworld, that means bringing star Evan Rachel Wood's salary up to par with the show's male leads, Anthony Hopkins and Ed Harris.

"I think I’m just now to the point where I’m getting paid the same as my male co-stars," she explained during a recent interview with the Wrap. While the news is great (not just for Wood, but for women everywhere as Hollywood takes the lead in setting an example of pay parity), Wood said that, while she always fights for equal pay, she felt that in Westworld's first season at least, she understood being paid less than her very seasoned male co-stars.

By season three, when the pay changes will take effect, however, Wood thinks that the work being done on set is equal and believes that should be reflected in her pay.

"I was just told that, you know, 'Hey, you’re getting equal pay.' And I almost got emotional. I was like, 'I have never been paid the same as my male counterparts … never, never.' I’m always fighting for that. Westworld, it’s like, I get it a little more. It’s like, 'Well, you’re Anthony Hopkins or Ed Harris.' But I think now we’re all doing equal amounts of work and really hard work."

Kayleigh Roberts Contributor Kayleigh Roberts is the weekend editor at Marie Claire, covering celebrity and entertainment news, from actual royals like Kate Middleton and Meghan Markle to Hollywood royalty, like Katie Holmes and Chrissy Teigen.
This content is created and maintained by a third party, and imported onto this page to help users provide their email addresses. You may be able to find more information about this and similar content at piano.io
Advertisement - Continue Reading Below
More From Celebrity
Meghan and Harry Blame the Palace for New Article
Serena Williams & Daughter Pose for First Campaign
Advertisement - Continue Reading Below
Britney Spears Shares Rare Photo of Sons on IG
Kim Kardashian Fell Asleep Mid-Glam
Things Are "Bad" Between William and Harry
A Look at Royal Family Portraits Through the Years
40 Rare Photos of Grace Kelly Through the Years
The 50 Most Popular Episodes of ‘Friends,’ Ranked
Inside the Royal Family's Secret Code-Word System