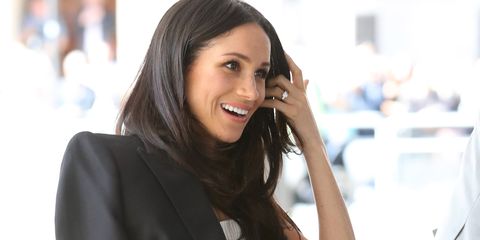 Today, Prince Harry and Meghan Markle are meeting with delegates for the Commonwealth Youth Forum in London.

Earlier this week, the royal family announced that Harry was the ambassador for the organization, part of the Queen's Commonwealth Trust, for which Harry is also serving as president.

During a speech Monday, Harry announced that his fiancée, Meghan Markle, would be involved with the Youth Forum as well, although he didn't specify when or how.

"I am also incredibly grateful that the woman I am about to marry, Meghan, will be joining me in this work, of which she too is hugely excited to take part in," he said at the time.

Well, Meghan's involvement has started already. Together, the couple are meeting with delegates of the Forum for updates about the connections attendees have made and the challenges being discussed at the summit.

On the third day of #CHOGM2018, Prince Harry and Ms. Markle are meeting young delegates at the Commonwealth Youth Forum. pic.twitter.com/8dYurJrlF9

The fact that Meghan is joining Harry in his work for the Youth Forum more than a month before their wedding is huge—and completely unprecedented. As People notes, a royal fiancées are typically not invited to attend official engagements, especially those as officially and closely tied to the royal family's work as the Commonwealth Heads of Government Meeting this week. It's clear that the royal family has a lot of faith in Meghan and they're making a point of showing it.

Meghan was the picture of royal sophistication at the event, in a sleeveless black and white striped dress Altuzarra and a black blazer by Camilla and Marc.

Related Story
Shop Every One of Meghan Markle's Best Looks
Kayleigh Roberts Contributor Kayleigh Roberts is the weekend editor at Marie Claire, covering celebrity and entertainment news, from actual royals like Kate Middleton and Meghan Markle to Hollywood royalty, like Katie Holmes and Chrissy Teigen.
This content is created and maintained by a third party, and imported onto this page to help users provide their email addresses. You may be able to find more information about this and similar content at piano.io
Advertisement - Continue Reading Below
More From The Ultimate Guide to the Royal Family
Will and Kate Attend the ‘No Time to Die’ Premiere
Harry Carries Briefcase That Reads "Archie's Papa"
Advertisement - Continue Reading Below
Meghan Markle and Prince Harry Arrive in NYC
Princess Beatrice Has Given Birth to a Baby Girl
How Meghan & Harry Spent Their 2-Year Anniversary
Charlotte Has Two Major Milestones Coming Up
Kate Made a Very Common Shoe Shopping Mistake
The Queen Is Lawyering Up, Apparently
Harry & Meghan Are Still Close to the Queen, TYVM
Archie Inspired Harry and Meghan to Take a Stand