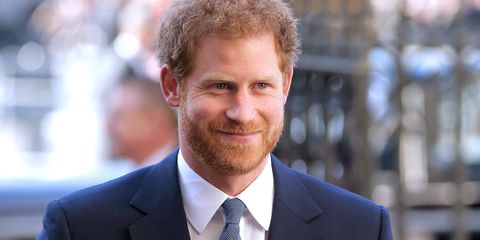 Prince Harry has added a new job to his ever-growing royal résumé: Commonwealth Youth Ambassador. The Queen just appointed Harry to the role. Last week, she named him president of The Queen's Commonwealth Trust.

The Queen's Commonwealth Trust is a new youth charity which aims to give young people across the Commonwealth a platform to discuss (and attempt to make changes about) things such as education, sport, health, and the environment.

"The Queen has always believed in young people’s ability to positively transform lives across communities and much further beyond. On her 21st birthday, The Queen dedicated her life to the service of others, inviting young people to join her and help make progress for all," the charity's website explains. "Our President, Prince Harry recognizes the potential the Commonwealth family has—with this generation's vision, passion, effort, and connectivity—to make a lasting beneficial impact with their ideas for hopeful social change."

Harry began his work as ambassador today, attending the Youth Round Table and opening session of the Youth Forum.

"In my new role I will work to support The Queen, my father The Prince of Wales, and my brother William, all of whom know that young people are the answer to the challenges of today," Harry said in a speech to attendees of the Youth Forum, according to Daily Mail royal correspondent Rebecca English.

Harry went on to hint that his fiancée, Meghan Markle, will be taking on a role in the organization as well.

"I am also incredibly grateful that the woman I am about to marry, Meghan, will be joining me in this work, of which she too is hugely excited to take part in," he said.

Harry did not say what Meghan's involvement will be or hint as to what her official title at the Queen's Commonwealth Trust might be (if she has one, that is), so we'll just have to wait and see on all counts.

Related Stories
Prince Harry Doesn't Want Wedding Gifts
A Guide to Prince Harry's Bachelor Party
Your Official Guide to Meghan and Harry's Wedding
Kayleigh Roberts Contributor Kayleigh Roberts is the weekend editor at Marie Claire, covering celebrity and entertainment news, from actual royals like Kate Middleton and Meghan Markle to Hollywood royalty, like Katie Holmes and Chrissy Teigen.
This content is created and maintained by a third party, and imported onto this page to help users provide their email addresses. You may be able to find more information about this and similar content at piano.io
Advertisement - Continue Reading Below
More From The Ultimate Guide to the Royal Family
The Queen Has a Collection of Dog Toys for Sale
Meghan Revealed the Nod to Diana in 'The Bench'
Advertisement - Continue Reading Below
Will Spent Father's Day with George and Charlotte
Charles Won't Allow Archie to Become a Prince
Prince Charles Cant Deal with Harry's Criticisms
Meghan and Diana Had Similar Issues with the Queen
The Queen Insisted on Cutting a Cake with a Sword
Harry Texted Kate, Not Will, When Lili Was Born
Kate's Kids Want Her to Stop Taking Their Pictures
Kate Wore a Pearl Bracelet That Used to Be Diana's