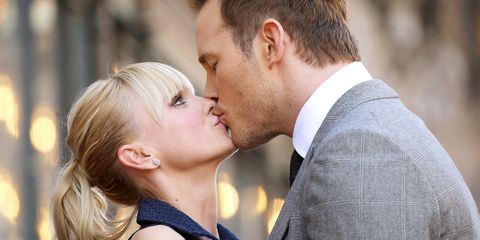 When Chris Pratt and Anna Faris announced their decision to split in August of 2017 after eight years of marriage, the news left the world devastated. Was true love dead? fans wondered. Because, honestly, if a couple as perfect as Chris and Anna couldn't make it work, who possibly could?

Now, Pratt is finally opening up about the split and what it's like coparenting his and Faris' five-year-old son, Jack.

"Divorce sucks," he told Entertainment Weekly. "But at the end of the day, we've got a great kid who's got two parents who love him very much. And we're finding a way to navigate this while still remaining friends and still being kind to one another. It's not ideal, but yeah, I think both of us are actually probably doing better."

Even though he says that "divorce sucks" (true statement, Chris), Pratt also says that he and Faris are both "probably doing better" since separating. While it's heartbreaking to learn that these two don't seem headed for miraculous reconciliation, it's always good to learn that people you admire and respect are doing well, so we have to reluctantly call this good news.

Faris has made similar statements hinting at the difficulty of separating and the couple's ongoing commitment to co-parenting.

"What Chris and I try to do is to communicate openly," she told Women's Health. "We reiterate that there aren't rules to this. We have a lot of love and friendship, and our big goal is to protect [our 5-year-old son] Jack. I cherish my family, my close friends, my child – that makes the rest of it worth it."

Kayleigh Roberts Contributor Kayleigh Roberts is the weekend editor at Marie Claire, covering celebrity and entertainment news, from actual royals like Kate Middleton and Meghan Markle to Hollywood royalty, like Katie Holmes and Chrissy Teigen.
This content is created and maintained by a third party, and imported onto this page to help users provide their email addresses. You may be able to find more information about this and similar content at piano.io
Advertisement - Continue Reading Below
More From Celebrity
Lilibet May Be Christened in California After All
The Sweet Family Photos in Prince William's Office
Advertisement - Continue Reading Below
Royal Family Members Can’t Eat Pasta or Potatoes
Prince George Is an Environmentalist, Too
Salma Hayek Looked Super Hot in Leopard Print
Britney Spears Just Trolled Justin Timberlake
Billie Eilish Says Kate and Will Were "So Normal"
Prince William Slammed Billionaires' "Space Race"
Lady Gaga Draped Herself in $100 Bills
Kate Middleton Wore Green to Celebrate Nature