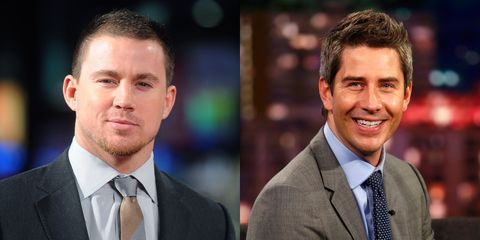 The two bros spent Sunday together at the Barber Motorsports Park in Alabama, Us Weekly reports. Luyendyk posted a photo of himself with Channing, captioned, "Such a great dude! Fun meeting @channingtatum and getting to lead the field to green in the @Honda IndyCar."

Such a great dude! Fun meeting @channingtatum and getting to lead the field to green in the @Honda IndyCar 🤙🏼

While Luyendyk's fiancée, Lauren Burnham, was not present for the bro-fest, he did get Tatum to record a message for her on Instagram Stories. "What’s up, Lauren," the actor said in the video. "I’m about to do something stupid."

Tatum also commemorated the day on Instagram, posting a collage of pictures of himself (and Luyendyk) at the racetrack. "Crazy fast couple laps in the rain!! Thanks @ariejr! And what an incredibly beautiful track Mr. Barber. Can’t wait to come back here and rip some hot laps," he wrote in the caption.

Tatum's ex, Jenna Dewan, also made her first public appearance since their split this weekend. By comparison, she attended the St. Jude Children's Research Hospital's fifth annual St. Jude Hope & Heritage Gala in New York City, where she was honored as the organization's Humanitarian of the Year.

Thank you @stjude for this incredible honor! I am so proud of everything you do and continue to do for children❤️🙏🏻

Dewan also spent the weekend hanging out with another guy—her father, Darryll Dewan, who she brought to the gala as her "date."

Tatum and Dewan announced their decision to separate on April 2 with a joint statement released on Instagram.