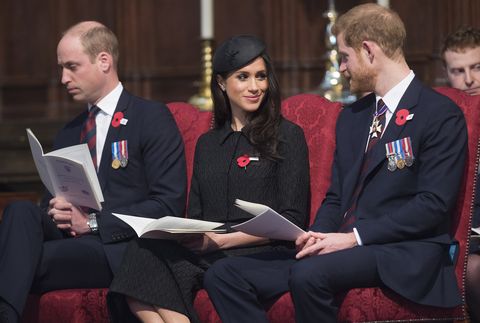 Prince William was every new parent in the world who has ever had to go back to work too soon after welcoming a new baby. Just two days after welcoming his third child, a boy, with Kate Middleton, Will returned to his royal duties and attended the annual Anzac Day Service of Commemoration and Thanksgiving at Westminster Abbey.

The father of three appears to be struggling to stay awake in a clip from the service that is going viral (as it deserves to):

Life with a newborn baby. 😴😂 pic.twitter.com/I3c6bF5HkR

William sat alongside his younger brother, Prince Harry, and his soon-to-be sister-in-law, Meghan Markle, at the service, where he looked truly exhausted.

Earlier today, before the whole almost-nodding-off-in-public thing, Will told reporters that everyone in the royal family was "in good form, luckily."

He even went so far as to praise the baby prince's sleeping habits, which seems like it might have been an exaggeration on Will's part.

"Sleeping’s going reasonably well so far, so he’s behaving himself which is good," William said.

Of course, fans sympathized with Will—especially fans who are parents themselves (or have ever had to spend the night with a newborn, for that matter).

People laughing at Prince William dozing off during the ceremony do not know what it’s like to spend the night with a newborn who doesn’t let you sleep. Become a parent first, then you’ll find it admirable that he has shown up at the ceremony, which started really early 😒

Who cares? Leave the poor guy alone. He has a new baby and two young children. I’m surprised he wasn’t sound asleep and snoring!

He’s human after all A mans gotta sleep like everyone else.

Will and Kate welcomed the latest member of their family on Monday and introduced him to the world with a photo call on the steps of the Lindo Wing of St. Mary's Hospital in London later that day. While Kate looked amazing and totally composed during the official photo call, she (quite understandably) opted to skip the Anzac Day Service on Wednesday.

Kayleigh Roberts Contributor Kayleigh Roberts is the weekend editor at Marie Claire, covering celebrity and entertainment news, from actual royals like Kate Middleton and Meghan Markle to Hollywood royalty, like Katie Holmes and Chrissy Teigen.
Advertisement - Continue Reading Below
More From The Ultimate Guide to the Royal Family
Meghan Markle's $65 Sunglasses Have Been Restocked
Meghan Markle Would Love to Be the Breadwinner
Advertisement - Continue Reading Below
I Need Kate Middleton's Leopard Print Skirt
A New Show About the Royals Is Coming to HBO Max
Prince Harry Grins as He Returns to Canada
Meghan Markle Went on a Hike With Archie
Kate Middleton Stuns in New Needle & Thread Dress
Camilla's Asked Whether She'll Miss the Sussexes
Harry's Speech Sounds Just Like Diana's in 1993
The Coat Styles You'll Always Find Meghan Wearing