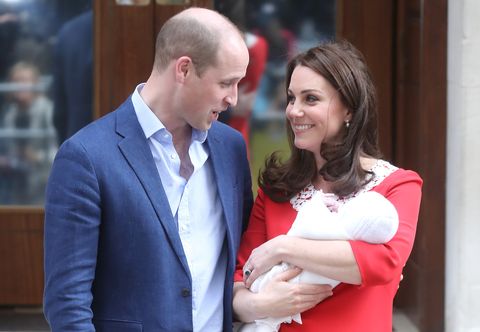 On Monday, Prince William and Kate Middleton welcomed their third child, a baby boy, and introduced him to the world with a photo call on the steps of the Lindo Wing of St. Mary's Hospital in London.

While the young prince's name has yet to be announced, William did give royal watchers an update about the new baby. The update came during an appearance at the Anzac Day Service of Commemoration and Thanksgiving at Westminster Abbey Wednesday, which Will attended alongside his brother, Prince Harry, and soon-to-be sister-in-law, Meghan Markle.

When asked how the new baby is doing, People reports that Will replied, "Very well, thanks."

Everyone is "in good form, luckily," according to William—probably because the infant prince is so well-behaved. "Sleeping’s going reasonably well so far, so he’s behaving himself which is good," he added.

William also reportedly joked about possible baby names at the service, tossing out "Alexander" (one of George's middle names) and Jerry (???) as possibilities.

Prince William was heard making jokes today about possible #royalbabynames including Alexander (George’s middle name) and Jerry. Ok William, you are just playing with us now! Put the world out of its misery! #royalbaby #royalbaby3

While Kate (very understandably) skipped the afternoon Anzac Day service, Will was in good spirits at his first royal engagement since the birth. He and his future sister-in-law even shared a sweet greeting at the event, exchanging kisses on the cheek.

The newest addition to the royal family was born Monday morning and weighed in at 8 lbs., 7 oz.—making him the largest of Kate's three children at birth. The new baby's birth also marked a history-making occasion for his big sister, Charlotte, who officially became the first female royal not to lose her place in the line of succession to a younger brother.

Related Stories
Kate Middleton Held Each Royal Baby Differently
Serena Williams Calls K-Midd One Heck of a Woman
Kayleigh Roberts Contributor Kayleigh Roberts is the weekend editor at Marie Claire, covering celebrity and entertainment news, from actual royals like Kate Middleton and Meghan Markle to Hollywood royalty, like Katie Holmes and Chrissy Teigen.
This content is created and maintained by a third party, and imported onto this page to help users provide their email addresses. You may be able to find more information about this and similar content at piano.io
Advertisement - Continue Reading Below
More From The Ultimate Guide to the Royal Family
Meghan Wasn't Appreciated for Royal Contributions
Harry & Meghan Have Had a Painful Year Since Exit
Advertisement - Continue Reading Below
The Queen's Hot Grandnephew Is a Thirst Trap
Watch Diana Play Impromptu Piano in Rare Clip
Peek Inside the Cambridges' Country Home
Harry Is Heartbroken About His Family Situation
William and Harry Could Fight Over Diana's Legacy
William Reveals Which of His Kids Is the Cheekiest
Rob Lowe: Prince Harry Is Rocking a Ponytail Now
A Look Back at Princess Anne's Life in Photos