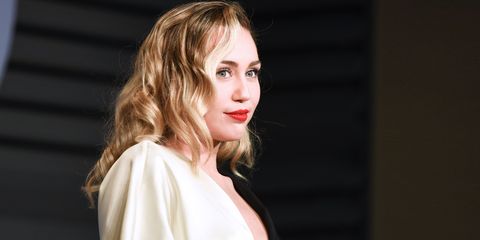 Miley Cyrus actively courted controversy for years after her tenure as a Disney Channel darling. The singer shed her wholesome Hannah Montana image with divisive performances and costumes before settling into her current Younger Now era.

On Sunday, Cyrus posted a series of throwback pictures, including one that resurfaced a decade-old scandal. In the tweet, she posted the cover of a 2008 issue of the New York Post, emblazoned with the headline: "MILEY'S SHAME," and "TV's 'Hannah' apologizes for near-nude pic."

Although Cyrus apologized for the controversial photo when it made headlines in 2008, she retracted that apology with her tweet: "IM NOT SORRY. F*ck YOU #10yearsago."

Cyrus, who was 15 at the time, stood by the shot (taken by famed photographer Annie Lebowitz) in its accompanying Vanity Fair interview. "No, I mean I had a big blanket on," she said in the article. "And I thought, 'This looks pretty, and really natural.' I think it’s really artsy."

Later, after outrage from fans (and parents of fans), the then-Disney star issued a statement apologizing for the picture and expressing embarrassment over the whole situation. "I took part in a photo shoot that was supposed to be ‘artistic,’ and now, seeing the photographs and reading the story, I feel so embarrassed," she said in her statement. "I never intended for any of this to happen and I apologize to my fans who I care so deeply about."

Disney also publicly decried the photoshoot, with a company spokesperson saying, "Unfortunately, as the article suggests, a situation was created to deliberately manipulate a 15-year-old in order to sell magazines."

Though she didn't say why she decided to re-up the photo and retract her apology now, it seems Cyrus is no longer embarrassed.