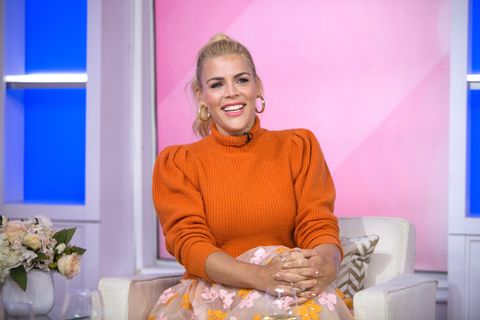 Busy Philipps has confirmed that she is the new host of a late-night talk show set to premiere on E! later this year.

"THIS IS WHO I AM NOW," the actress, who stars in the newly released comedy I Feel Pretty with Amy Schumer, wrote on Twitter Tuesday, quoting a tweet announcing the news.

According to The Cut, the new show has the working title Busy Tonight, and Philipps is listed as one of the executive producers. She will work alongside Julie Darmody and Eric Gurian, who was Tina Fey’s partner at their production company, Little Stranger.

The new series will reportedly consist of comedic commentary, interviews, and segments that delve into Philipps' social media musings on her Instagram Stories, according to The Hollywood Reporter. An official premiere date has not been announced, but it is set to debut on the cable network this year.

With this announcement, Philipps, 38, joins a small group of women who have hosted a their own late-night talk show. Chelsea Handler most famously had her own E! show, Chelsea Lately, which aired from 2007 to 2014.

Joan Rivers was the first woman to ever lead a talk show with the Fox Network's The Late Show Starring Joan Rivers in 1986. Most recently, TBS' Samantha Bee, BET’s Robin Thede, and Hulu’s Sarah Silverman have been front and center for their programs.

Production on Philipps show is scheduled to start this summer in Los Angeles. Busy Tonight is one of six new series E! greenlit this year, which also includes a reality show starring Ashlee Simpson and her husband Evan Ross called Ashlee and Evan.

Eileen Reslen I’m Eileen, the digital news reporter at Hearst Digital Media.
This content is created and maintained by a third party, and imported onto this page to help users provide their email addresses. You may be able to find more information about this and similar content at piano.io
Advertisement - Continue Reading Below
More From Celebrity
Royals Had Several Talks About Archie's Skin Color
See Blake Lively's *Impressive* Watermelon Cake
Advertisement - Continue Reading Below
Prince Charles Cant Deal with Harry's Criticisms
Serena Gave Daughter Olympia a Tennis Lesson
Meghan Shared What Helped Her Through 2020
Kylie and Travis Are "Very Close" After Reuniting
Meghan's Book 'The Bench' Tops Best Sellers List
Kaavia Talks to a Bee in an Adorable IG Video
David Harbour on Being Stepdad to Lily Allen's Kid
Ben Affleck Is "Getting to Know" J.Lo's Kids