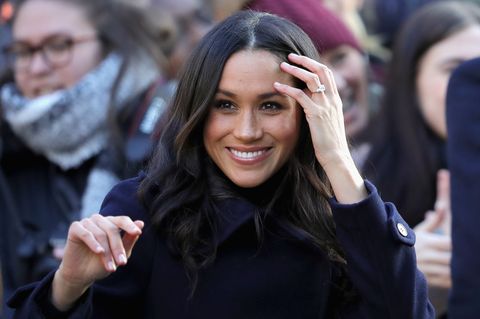 Meghan Markle and Prince Harry will tie the knot on May 19. While all of the official details about the wedding have come courtesy of Kensington Palace, a few tidbits have leaked from members of Meghan's inner circle of fellow celebrities. Here's everything Meghan's closest friends have revealed about the big day.

Meghan cried when she found her wedding dress.

During an interview on Watch What Happens Live with Andy Cohen, Priyanka Chopra was challenged to a game aptly called "Spill the Royal Tea." Chopra tried her best not to answer the questions, but her facial expressions did seem to give some details away.

When asked if Meghan had cried when she found her wedding dress, Chopra gave a big smile and then buried her face in her hands. At that point, both Cohen and fellow guest Sebastian Stan yelled, "yes!"

Priyanka Chopra will be there.

During an interview on The Jenny McCarthy Show, Chopra confirmed that she will be in attendance at the royal wedding.

"I've known Meghan for a few years now and I'm super happy for her, and I'm just really happy to be a part of her big day, ya know?" she said.

Serena Williams is a hard maybe.

During Good Morning America interview, Williams was coy about her RSVP status to the royal wedding.

"I don’t know, I think it's during one of the tournaments, I'll see if I can make it," she said, but added that she's happy for her friend whether she can attend the ceremony or not. "I'm obviously super happy for her. She's such a great girl and she is incredibly nice and I couldn't be happier for her."

The wedding will be a "fairy tale."

Chopra has had a lot to say about the royal wedding in recent weeks. During an appearance on Barstool Sports' Sirius radio show Chicks in the Office, she described Meghan's romance as a "fairy tale" and described what she thought the big day would be like and how becoming royal would affect Meghan.

"It's a fairy tale for our generation," she said. "I think it will be really fun, I’m really happy for Meg, Meghan. And I just feel like it's gonna be such a life-changing thing not just for them, but for the world and for young girls out there because she is one of us, right? She’s that girl.. She loves grocery shopping."

She's getting some classic wedding gifts.

Meghan's former work husband, Suits costar Patrick J. Adams, hasn't confirmed if he'll be at the wedding, but he did spill some of the gifts he's considering for Meghan and Harry.

"We were trying to choose between like a blender or bread maker. You know something classy, like a good blender," he told Entertainment Tonight. "Like a Vitamix, yeah. She's gonna need a Vitamix for sure. Whether I'm there or not, the Vitamix is going to the wedding."

But the couple really wants donations to their favorite charities in lieu of gifts.

While the couple will naturally be grateful for any gifts they receive, they would really like donations to charity.

"I think what they would love is [for people] to donate to one of the charities that they are involved in," longtime friend Abigail Spencer told Entertainment Tonight. "That's where her heart is. I think they need nothing more and want for nothing, but also would just love for anybody pour out their hearts and wallets into the organizations that they're involved in."